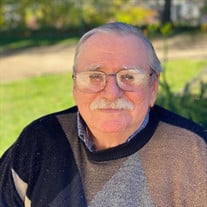 James “Jim” Allan Montgomery entered this world on January 5th, 1943 in Long Beach, CA and was the only child of Dorothy Marie Roberts and Harvey Allan Montgomery. His father tragically passed away from a brain aneurysm before Jim was born. As a child, Jim spent a lot of time visiting his paternal grandparents, Harvey James Montgomery and Emily Barbara Allard, at their ranch in Delhi, CA. He attended Huntington Beach High School in Orange County until he transferred to and eventually graduated from the newly opened Westminster High School. During his high school years Jim met his sweetheart, Cheryl Lee White, on a blind date. In April 1962, they eloped to Tijauna, Mexico since they were both too young to be married in California without their parents’ permission. Jim and Cheryl later had 3 children, Jacci (Jacqueline), James and John. They were married 43 years until Cheryl’s death in 2005. Jim always had a strong sense of civic duty, community involvement, and civil responsibility. While he was working in the streets department for the City of Westminster, he was first recruited for the local fire department. Beginning in December 1964, Jim began his career for the Santa Ana Fire Department. He quickly advanced his career, eventually retiring 31 years later as deputy chief. He proudly served in the United States Marine Corps from 1961 - 1969 when he was honorably discharged as a corporal (E4). And even before his own boys were old enough to join, he diligently volunteered with the Boy Scouts of America for many years. He loved to serve and always did his best regardless of the specific job title. In the spring of 1992, Jim and Cheryl moved from Fountain Valley, CA to “retire” in Valley Center, CA. It was there that their mutual passion for exotic birds really flourished. Together they skillfully raised many varieties of birds including everything from finches, lovebirds, and cockatiels to the larger Amazons, African Greys, and macaws and everything in between. Jim also spent many hours in his workshop creating all sorts of beautifully crafted items using metal, wood, cloth, or whatever sparked his interest. He loved to tinker with just about anything. If in the mood, it would not be unusual for him to spend two or three days making a tool for a particular project when he could probably have bought one for $2 from the local hardware store. Jim loved to travel and he also enjoyed photography. Yes, he was one of “those people” who would offer to show you the slides he took from the last family vacation. And like many great minds, there were always plenty of projects waiting for him to “get around to it.” He thoroughly enjoyed keeping up with his regular TV shows, napping in his recliner and sipping on an ice cold Coke Zero. No matter what he did, he went all out, being a very loyal, dependable, and honorable man. Jim was probably proudest to serve as “Ampa” to his five grandchildren. He was a tremendous support and encouragement to each of them: Emma Finton (25), Amme Finton (19), Ezra Finton (16), Erin Montgomery (15) and Maggie Montgomery (11). He may have single-handedly kept Hallmark in business sending a greeting card filled with sprinkles and a one-dollar bill for each and every imaginable holiday, and he made sure they received the annual granddaughter or grandson Christmas ornament. He faithfully supported their fund-raisers and music lessons, attended countless dance recitals or baseball games, and never missed an opportunity to visit either in person or by Facetime. Jim and his favorite bird, Maria, spent the last few years of his life at Silverado Senior Living in Escondido. He received excellent care there and was well-loved by the staff, other residents, and their families. He was a frequent participant in many of the outings, parties, and Bible studies. He loved to assist the maintenance team with simple tasks and offer helpful insight into the proper care of the facility animals. Sadly he tested positive for the virus that causes COVID 19 and although he seemed to be managing the minor symptoms very well, he quickly took a turn for the worse and could not beat it. Jim passed away January 5th, his 78th birthday. His children Jacci (Michael) Finton of Valley Center, James (Therese) Montgomery of Salem, OR, and John (Christine) of San Diego along with his five grandchildren are comforted knowing that he is now in Heaven with his Lord and Savior, Jesus Christ. Jim is laid to rest in the Valley Center Cemetery, next to his beloved wife.

James &#8220;Jim&#8221; Allan Montgomery entered this world on January 5th, 1943 in Long Beach, CA and was the only child of Dorothy Marie Roberts and Harvey Allan Montgomery. His father tragically passed away from a brain aneurysm before Jim... View Obituary & Service Information

The family of James Allan Montgomery created this Life Tributes page to make it easy to share your memories.

Send flowers to the Montgomery family.