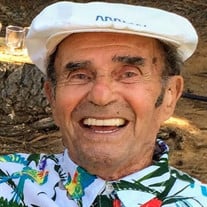 James Thomas Molaro 92 years old Resided in Escondido, California for 58 years (San Diego County) Date of Death: August 12, 2018 Place of Death: VA Medical Center, La Jolla California Born December 17, 1925 Place of birth: Herkimer Street, Brooklyn, New York, New York Parents: Frank Molaro and Theresa (Cicale) Molaro Siblings: Jean, Caroline, Paul, Virginia, Rose, Frank, George Marriage: Grace Sommers on November 23, 1950 Education: Finished eleventh grade, did not complete twelfth grade, self educated thereafter. Employment: As a journeyman union carpenter he built stairs, concrete formwork, commercial buildings. In residential construction he built houses complete. He built several houses to sell. Military Service: Drafted 2-28-1944 and honorably discharged 5-10-1946. Re-enlisted 3-14-1949 and was honorably discharged 3-12-1953. Served in the navy during World War II and the Korean War. He served on the USS Quincy. He served as an aviation mechanic. Places of residence: Brooklyn, New York, Alameda, California, Hicksville, New York, Escondido, California Hobbies/Interests: Golf, 4-H Dad, occasional fisherman, enjoyed reading, cooking, cards. Lifetime practising member of the Catholic Church. He was a Fourth Degree Knights of Columbus member. A lifetime, founding member of the Knights of Columbus Council at St Mary’s Catholic Church. Survived by: Spouse: Grace Molaro Children: Cliff Molaro, Kathy (Molaro) Kerr, Ellen (Molaro) Potter, James Molaro, Jr Children Spouses: Kathleen (Spencer) Molaro, Thomas F. Kerr, Beth (Smith) Molaro Grandchildren: Jacob, Jesse, Jazz, Joy, John, Jamie Thomas, Christine, Katie Jennifer, Dana, Josh Melissa, Matthew, James Great-grandchildren: Samuel, Sophia, Amelia Alyse, Orion Mirrabelle, Colette, Amelie, Adeline James, Zoey Worked hard. Spent carefully. Loved faithfully. Dad had a great smile. Dad had a deep faithful love for his wife (Mom). He always wanted to make her happy. Dad loved and supported his children. He didn’t agree with all of our choices but he never gave up on any of us. If you needed something and asked, he would give it to you. Dad lived a life in comfortable frugality. He bought and enjoyed things. He liked a deal. But he always said that he didn’t spend his money foolishly. Dad attended high school but beyond that he was self educated. Dad was a hard worker and did good work. He taught his children how to be good workers. Dad was not the leader type. But he did not have to be told what to do all the time. He could do things on his own. Dad was a strong follower. He was the kind that a boss or team leader love to have with him. This was true on the job. It was true in his ministry in church. Dad had a basic understanding of his Catholic faith. He had a strong faith. He celebrated Mass every Sunday. Dad quit smoking in 1985. Dad quit drinking in 1996. Dad forgave himself for his faults and failures. He made peace with himself and the world. After that he was happy. He sought forgiveness and made peace with God. Dad’s heroic virtue was Fortitude. Patient Endurance. The patient aspect of it grew with experience and maturity. The endurance aspect of the virtue was a character trait. He developed it into the foundation of how he lived his life. He did not talk about difficult issues. He certainly did not complain about them. He just endured the difficulties. That is how he approached dying also. He just endured until the end. No complaints. Dad was proud of of his military service, especially serving aboard the Quincy which escorted President Roosevelt and other dignitaries to the Yalta conference towards the end of WWII. He knew he was part of something much bigger than himself. He considered it an honor. Dad was happy with his success in life, he was proud of himself in a good way. His life was like the Proverb: “The Lord makes rich and adds no sorrow to it.” Dad was known to his grandchildren as a great cook. His Italian food was legendary. He played lots of card games with his children and grandchildren. He won most of them. Dad you gave us a great start. You are a blessing in our lives. We love you. Thank you.

The family of James Thomas Molaro created this Life Tributes page to make it easy to share your memories.

Send flowers to the Molaro family.