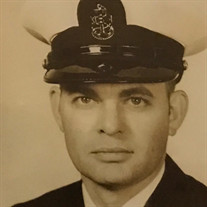 James Clarke (JC) Gary of Escondido passed away from sepsis on December 30, 2016 at the age of 82. He was born in 1934 in Trenton, KY and served in the US Navy from 1956 – 1974 and retired at the rank of Chief Petty Officer. During his service on the USS Vulcan (AR-5), graduated from the Navy’s nuclear power school and served on the one of the first nuclear powered ships in the US Navy the USS Bainbridge (CGN-25), a ship which made an 30,000 mile cruise around the world without refueling in 1964. From 1964 - 67, he was an instructor at the Great Lakes Navy School outside Chicago then was moved by the US Navy to San Diego, CA. From 1967-72, he was deployed on long combat tours during the Vietnam War on the aircraft carrier, USS Bon Homme Richard (CVA-31). He later served on the USS Jason (AR-8), which at the time was the oldest commissioned ship in the Navy. His navy service took him to Japan, the Philippines, and European countries in the Mediterranean Sea. Two of his sons, Todd and Chris, participated in a tiger cruise from Pearl Harbor to San Diego on the USS Jason. Two more sons, Brian and Jason, also served our country in the US military. After his military service, JC had an additional 20-year career in the civil service, earned an MBA from National University, and for 47 years he helped individuals prepare their income taxes and was active in the freemasons. He was a good racquetball player in the 1970s and had conducted extensive research in genealogy tracing one line of the family history back to 1050AD. He was known to have a generous and helping spirit. He along with his wife, Gayla Gary, were active members of the Creative Center for Spiritual Living in Escondido, CA. His parents were Reverend James Emett Gary and Mary Clarke Gary of Silver Point, TN. He is survived by his wife, Gayla Gary, whom he referred to as his “awesome” lady; her son Scott Bradley Mills, his wife Donni Mills and children Brad, Dustin, and Rachel. JC is also survived by sister, Robbie Estus of Colorado, sons: Todd Patrick Gary, Jay Christopher Gary, Brian Gary, Jason Clarke Gary, and Scott Bradley Mills; daughters: Erin Annette Gary and Star Christine Lovey; daughter-in-laws: Frances Lee Gary, Lynn Gary, Nicole Gary, and Donni Mills; and thirteen grand and step-grandchildren. During his long life, he was also married to Carolyn Gates Berg (1956-1975) and Shirly Lynes (1975-1992). Donations in his honor can be made to the Creative Center for Spiritual Living Escondido, PO Box 460504, Escondido, CA 92046. JC Gary's Military Service will take place May 12, 2017 at 1pm. Miramar National Cemetery 5795 Nobel Drive, San Diego, CA 92122 Arrive at 12:30pm with car in "lane 1" for 1pm service. Church Service May 13, 2017 at 2pm Creative Center for Spiritual Living Escondido Joslyn Senior Center - Escondido (Oak Room) 210 E Park Ave, Escondido, CA 92025 Center phone 760-839-4688

The family of James C. Gary created this Life Tributes page to make it easy to share your memories.

James Clarke (JC) Gary of Escondido passed away from sepsis on...

Send flowers to the Gary family.