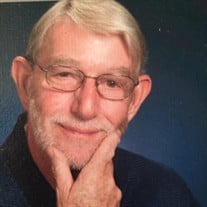 ESCONDIDO — James Cason “Jim” Dickinson passed away March 18, 2022, after a two-year battle with congestive heart failure. He was 87. Jim was born on Oct. 16, 1934, in St. Louis, Mo., to Harry Barham Dickinson, Sr., and Katherine Hunter Boatwright Dickinson. He grew up in Coulterville, Ill., the youngest son of the town’s only doctor. After moving to California, he attended UCLA where he met the love of his life, Barbara Anita Bartz. The couple was married in June 1957. Jim graduated in June 1958 with a BA in bacteriology (now microbiology). He had a long career in medical technology in Escondido, as chief medical technologist at Palomar Memorial Hospital, operating his own medical lab for many years, and concluding his career in 2010 in the clinical laboratory at Pomerado Hospital in Poway. Always curious about new technology, he embraced automation when it came to medical testing. But he approached machine-derived test results with a scientist’s skepticism, retesting by hand if needed or requested. A consummate perfectionist in the lab, he was also an accomplished pianist and golfer, even scoring a hole-in-one in his later years. He was an active member of San Rafael Parish Church in Rancho Bernardo and participated in trips to the Holy Land and Rome with the Rev. Dennis Mikulanis. He is preceded in death by his parents and a brother, Robert, who died in infancy He is survived by his wife, Barbara; daughter, Mary Dickinson Edwards; son, James Cason Dickinson, Jr.; his brother, Harry Barham Dickinson, Jr.; three grandchildren, Jessica Bettendorf; Alexander Cason Edwards; Virginia Gray; a great-grandson; and several nieces and nephews. A funeral mass will be held at 1 p.m., April 29, at San Rafael Catholic Church, 17252 Bernardo Center Dr., San Diego, CA 92128. In lieu of flowers, please consider a donation to the ASPCA or Escondido Humane Society.

In lieu of flowers, please consider a donation to the ASPCA or Escondido Humane Society.

Send flowers to the Dickinson family.