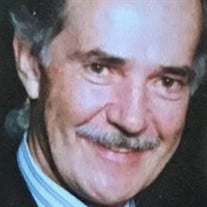 James V. Atkinson Jr., at the age of 86, passed away peacefully on Monday July 20th at his home in Escondido, CA. Jim or "Dad" as he was known to his eight children was born with the luck of the Irish on March 17th, 1934 in Brighton, Massachusetts to James and Mary Atkinson. He graduated from Newton High School and went on to earn his Bachelor's Degree in Business at Boston College. Upon graduating from Boston College in 1955, he joined the Marine Corps and went into Officers Candidate School in Quantico, VA. He spent the next four years at Camp Lejeune, NC and was promoted to Captain before being Honorably Discharged. He then began his career in finance and worked for several different companies as a Municipal Bond Trader. He distinguished himself in the Financial Services Industry over a 36-year period and culminated his career as a Senior V.P. and Municipal Bond Fund Manager for Union Bank of California. He was an avid athlete; he would ride his bike to work long before it was fashionable back in the 60's, sometimes logging 20 miles each way into the city of Boston. He loved to watch and play ice hockey, swim in the ocean, golf, squash, tennis and go for a run. He continued to play sports well into his seventies and when he showed up at the ice rink for an ice hockey game with local firefighters, they were amazed at his ability for someone of his age. In efforts to flee cold weather, he moved to greener pastures in California in 1980, first settling in Los Angeles and eventually Escondido where he lived the rest of his life. An enthusiastic music fan, he never missed an opportunity to belt out an Irish tune – especially at family gatherings where he loved getting everyone to join in as well. He loved spending time with his grandchildren and encouraging them to excel and enjoy life. He’s long been known in the family for his catch phrases like “we are off like a heard of turtles” and “terrific!” which have become family sayings forever; a lovely reminder of ‘Gramps.’ Dad will always be remembered for his wonderful laugh, strength, words of wisdom, intelligence and family patriarch. He is survived by his wife Georgia of 33 years and six of his eight children: Kathleen Edlin, Nancy Negoshian, Susan Prickett, Mary Hynes, Lisa Graham and Stacey Atkinson; step daughters Angela Warner and Yvonne Rodriguez; his younger brother Paul Atkinson of Medford, MA; as well as 21 grandchildren and 21 great-grandchildren. Jim was preceded in death by his parents, sister Marie (Byrne) Cleary and his sons, Brian and Stephen. A service is scheduled at St. Ignatius of Loyola 28 Commonwealth Ave., Chestnut Hill, MA to celebrate his life on August 22. Online condolences can be left at Legacy.com and https://www.alhiser-comer.com/obituaries/ [alhiser-comer.com]. I n lieu of flowers donations in his memory can be made to The Parkinson’s Foundation: https://www.parkinson.org/ways-to-give

James V. Atkinson Jr., at the age of 86, passed away peacefully on Monday July 20th at his home in Escondido, CA. Jim or "Dad" as he was known to his eight children was born with the luck of the Irish on March 17th, 1934 in Brighton, Massachusetts... View Obituary & Service Information

The family of James V. Atkinson Jr. created this Life Tributes page to make it easy to share your memories.