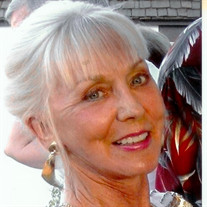 Hildegard Johnston was born in Southern Germany on November 29, 1941 and was christened Hildegard Maria Theresia Harlacher. She was the seventh of eight children and started life on the family farm in war-torn Germany. She was subjected to a way of life that most people cannot easily comprehend unless they have been actually involved in a war that destroyed the country infrastructure as well as normal food and clothing supply lines. All the family clothing was family-made, even a lot of the material was actually woven on family spinning wheels. This environment was difficult; however, it gave Hildegard the hands-on capability, which has served her so well during her lifetime. After completing the equivalent of two years of college in a convent in West Germany, Hildegard attended the Kermess Hotel Administration and Management Academy in Munich during 1960-61. In 1961-62 she studied Western Civilization at the “School of English Studies” in Kent, England, during which time she became proficient in the English language. The next year, she continued her studies at the “Universite de la Sorbonne” in Paris, where she perfected her French along with her studies. Next came actual application of the skills she had acquired in the Hotel Management Academy and she was employed by the International Hotel Association in various positions in two hotels: Hotel Lowen, Friedrichshaven, West Germany (1963) and Hotel Bayrischer Hof, Lindau, West Germany (1964) where she was promoted to General Manager. Hildegard was hired in Europe as a flight attendant and because of her capacity to assume responsibility and deal with all matters relating to public relations, she was promoted to the position of In-Flight Purser for Pan Am. She was initially based in New York, then San Francisco and finally in Los Angeles. Because of her language skills; German, French, and English at that time; she almost exclusively flew international routes to literally every major city serviced by Pan Am in Europe, the Middle East, South and Central America, Australia and Africa. As an international purser she was assigned to the Boeing 747 aircraft and was responsible for the performance of 14 to 18 flight attendants as well as the comfort and safety of up to 400 passengers. Her outstanding performance and dedication was rewarded on many occasions as noted in the many letters of recommendation, thanks and congratulations. Hildegard’s first love was people-to-people programs. One of her most usable attributes was “never meeting a stranger”. She was at her best when she could be with both old and new friends and could talk and laugh. During this time she met her true love and soul mate, Roy. They married after about one year and Hildegard retired from Pan Am. After their marriage they lived in Costa del Sol, Spain; Brussels, Belgium and Munich, Germany. Her work activities consisted of assisting with translation and acting as interpreter for an American aerospace consultant. This also gave her the time to learn Spanish, review her French and stay fluent in her mother tongue (German). They returned to the U.S. in 1990 and she continued courses in Spanish, began Italian along with attending computer classes. After they both retired completely, they moved to California and finally settled in Rancho Bernardo.

Hildegard Johnston was born in Southern Germany on November 29, 1941 and was christened Hildegard Maria Theresia Harlacher. She was the seventh of eight children and started life on the family farm in war-torn Germany. She was subjected to... View Obituary & Service Information

The family of Hildegard Maria Theresia Johnston created this Life Tributes page to make it easy to share your memories.

Hildegard Johnston was born in Southern Germany on November 29,...

Send flowers to the Johnston family.