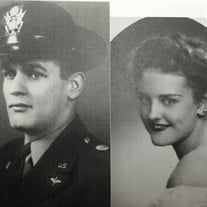 Herman Ernest “Lue” Luebbert, age 95, died Friday, 6 February 2015 in Escondido, CA. He was preceded in death by the passing of his loving “bride” Katherine Frances (Fullmer) Luebbert, age 93 on Christmas day, 2013. The couple had recently celebrated their 70th wedding anniversary on 28 August 2013. They were long-time members of San Rafael Catholic Church. Herman was born in Jefferson City, Missouri on 2 January 1920 to Herman Henry Luebbert and Mary Cecilia (Neutzler) Luebbert. Herman was a retired Air Force Colonel and Northrop master planner. Katherine was born on 3 September 1920 to Lester and Elizabeth (Redmond) Fullmer in Washington DC. Katherine was a past-president of the local American Red Cross organization and the Pomerado Hospital Auxiliary. Herman’s father died within two years of his son’s birth. There were no other siblings. Tuberculosis took Lue’s mother Mary when he was 10 years old. The Great Depression strained the ability of relatives to care for a young orphan and Lue drifted from one family to another. As a young man, he would work part-time as a janitor and airport line assistant to attend Jefferson City College and take flying lessons. He made discrete improvements to a broom closet at St. Peter’s Church where he slept and studied on the upper shelf. Katherine was the oldest of five siblings. Following high school she entered government service as a general officer’s secretary in the War Department in Washington DC. The stage was set to meet and marry the future Captain Herman Luebbert, U.S. Army Air Corps. In 1941, Lue graduated from B-25 training but a subsequent aircraft accident briefly grounded him. Awaiting return to flight duties, he was temporarily assigned to the War Department in Washington DC. Katherine Fullmer was in the same office and it was love at first sight. They were married on 28 August 1943 upon Lue’s return from Germany. Their marriage and the military took them to distant lands in the Far East. Katherine’s charm and grace made her an unofficial ambassador of the United States. Her knowledge of foreign cultures cemented bonds of friendship with allies and former adversaries. Eventually, she and Lue were assigned to Anchorage, Alaska. There, Katherine experienced the destruction of the “Good Friday” earthquake that destroyed their home in 1964. After Lue’s retirement from the Air Force, the couple settled in Poway, CA. As a master planner for the Northrop Corporation, Lue helped to modernize the air forces of the Republic of China and the Kingdom of Saudi Arabia. Katherine devoted her energy to the San Rafael Catholic Church where she was an active sponsor in the rite of Christian Initiation of Adults. In 1975, she pioneered the first generation of a medical alert system for seniors and was instrumental in expanding the life saving system throughout southern California. Despite a lifetime of globetrotting, Katherine felt her trip to Israel and tour of the Holy Land was her most memorable and enriching experience. The couple’s youngest son, Dr. Gregory Michael Luebbert, an Assistant Professor, USC-Berkeley died in a tragic kayaking accident May 1988. Their only daughter Kathleen Mary Johnson succumbed to cancer in November 2009 after a long and courageous battle. Inspired by her mother, “Kathi” was a Christ-centered person who sheltered foster children in addition to the loving care she provided her own family. In addition to the heartache of outliving two children, Lue never expected to outlive his loving wife. The resilience borne of life as an orphan and his quiet faith in the Almighty helped him bear these sorrows. Herman and Katherine Luebbert are survived by their eldest son, Stephen Paul Luebbert and his wife Marlaina. Also surviving the couple are three granddaughters, Hillary Laine Hamilton, Allison Ann Hubbard and her husband Mark, and Marissa Elizabeth Muse and her husband Danny. The two surviving grandsons include Stephen Justin Luebbert and his wife Heather, grandson Zachary Evert Johnson and his wife Diane. They are also survived by Kathleen’s step-children, Courtney Ann Riley, and her husband Scott and Robert C. Johnson, III and his wife Tracy. Katherine and Lue’s surviving great-grandchildren include Carrie Alexis Luebbert, Mary Grace Eccleston, Zoe Hubbard, Miles Hubbard, Ford Hamilton, Tanner Muse, Isabelle Muse, Vivienne Muse, Donovan Riley, Cameron Riley, Ainsley Johnson, Audrey Johnson. The couple is also survived by a host of dear Vineland Hills friends. A funeral mass will be celebrated by Rev. Msgr. Dennis Mikulanis at San Rafael Catholic Church at 11:30 a.m. Tuesday, 17 February followed by a brief reception. Joint interment and committal service will be conducted at Miramar National Cemetery, at 12:30 on 23 February under the direction of Alhiser-Comer Mortuary. Memorials for Katherine and Lue Luebbert may be made to either Vitas Hospice San Diego, 9655 Granite Ridge Dr. Ste 300 San Diego, CA 92123 (also on-line), or to the be.group at Redwood (pay to: be.group foundation RT; include on the memo line “Wish List”), 710 West 13th Avenue, Escondido, CA 92025.

The family of Herman and Katherine Luebbert created this Life Tributes page to make it easy to share your memories.

Send flowers to the Luebbert family.