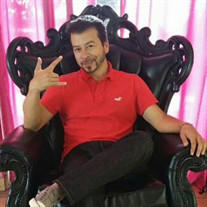 Henry O. Reyes was born and raised in Escondido, California. He was a sweet and loving child. He was helpful to his parents from a young age, a trait that was with him until his final breath. Henry found a passion for automobiles at a very young age. At first, he found fun expressing himself by placing stickers and vinyl emblems on the windows of his car. Then he discovered that he had a talent for repairing cars and modifying engines. His passion for vehicles reached a new level when he started modifying the exteriors of cars. A job he often recalled was the many times he long hauled semi-trucks cross country. His passion for travel was born. His adventurous spirit took him to many countries including his favorite, Japan, where he recently took his girlfriend and son. He also visited many countries in South and Central America. He taught his sister, Evette, about traveling and together they spent one month in the summer of 2008 in Western Europe. Henry’s unending desire to learn and help people led him to dentistry. While studying, he was involved in a charity called Flying Samaritans of which he spoke very warmly. His reputation for being reliable and helpful is known by many. At the time of Henry’s passing, he had completed dental school and was working to open a clinic of his own in San Diego County. The last couple of years he took on his best adventure, that of fatherhood. He loved spending time with his two-year-old son and would constantly talk about the big dreams that he had for him. Henry will be missed by his family of friends which extends from North County to Tijuana as well as many friends made during his travels overseas. His family will remember him as a gentle soul with a quick-witted personality. His positive impact on others will serve as an inspiration for all. His family will always remember his love for travel and will find comfort that his new journey will take him to the best destination yet. He leaves behind many memories with his girlfriend Claudia, his son Henry, his mother Mina, his father Amado, his sister Evette, brother-in-law Chris, and many uncles, aunts, and cousins. Please consider donating to his Go Fund Me: https://www.gofundme.com/mr-henryo

Henry O. Reyes was born and raised in Escondido, California. He was a sweet and loving child. He was helpful to his parents from a young age, a trait that was with him until his final breath. Henry found a passion for automobiles at a very young... View Obituary & Service Information

The family of Henry O. Reyes created this Life Tributes page to make it easy to share your memories.

Henry O. Reyes was born and raised in Escondido, California....

Send flowers to the Reyes family.