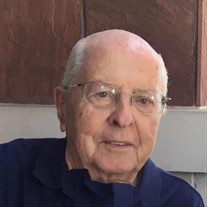 Harold Richard Phelps, Jr. May 3, 1930 - August 21, 2021 Harold Richard “Dick” Phelps Jr., a career Naval officer, tireless optimist and beloved family patriarch, died Saturday, Aug. 21, at Palomar Medical Center in Escondido. He was 91. Dick leaves behind his loving wife, Fara. September would have marked their 67th wedding anniversary. They were longtime residents of Mission Hills in San Diego. Dick was born to Dayle M. Phelps and Harold R. Phelps Sr., a schoolteacher, in a suburb of Pittsburgh, as the world economy was sinking into the Great Depression. At age 20, he enlisted in the U.S. Navy and rose to the officer ranks. While assigned to the USS Franklin D. Roosevelt he was stationed in Naples, Italy, where he met his wife and raised his young family. In addition to his wife, Dick is survived by his daughters Patricia Loeser, son in law Tom LOESER of Escondido and Sandra Shields, son in law Mike Shields of Santa Barbara; his grandchildren Andrew and David Phelps, Jenna and Alexa Loeser, and Ryan, Cory and Hailey Shields; and his great granddaughter, Harper Phelps. He is preceded in death by his sister, Corrine O’Donnell, and his only son, Rich Phelps, who died in 2004. Services are planned on September 2, 2021 1:30 PM at the San Luis Rey Mission in Oceanside. Military burial immediately following the service.

The family of Harold Richard Phelps Jr. created this Life Tributes page to make it easy to share your memories.

Send flowers to the Phelps family.