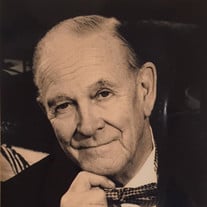 Harold (Hal) John Altenbern November 24, 1927 - May 31, 2017 Harold (Hal) John Altenbern, of Rancho Bernardo, California, died peacefully at home on May 31, 2017, at the age of 89 years young. Also known as ‘Your Pal Hal’ he was born and raised in Chicago, IL, where he met the love of his life, Alethea Smith, at Sears & Roebuck. He is sur-vived by Alethea, his wife of 67 years; daughters Dawn E. Walter of San Diego; Gayle (Dan) Grider of Solana Beach; Diane (Mark) Jones of Charlotte NC; and his son John (Laurie) Al-tenbern of Carlsbad; eight grandchildren and nine great-grandchildren. A US Army Air Corps veteran, Hal served during World War II. He went on to graduate from Northwestern University with a degree in Business Administration. A member of Toastmasters, Int’l and Dale Carnegie, he was known for his dynamic speaking skills. As such, he enjoyed a long and successful career. He became a mentor to younger generations, placing a high value on education. For his own family, he began the ‘Altenbern Tree of Knowledge’; a graphic depiction of the educational achievements of his descendants; now a meaningful part of his legacy. After attempting retirement 7 times, Hal decided to write 7 books, covering topics such as motivation, slices of life, autism and ‘prosetry’. An avid golfer, he could often be seen in his red golf cart on the RB Inn course. At the age of 82, he shot his age on the golf course. And at 85 years young, he parachuted out of a plane. Hal was a man of strong, Christian faith. He and Alethea were active in their church, making lifelong friends in Rancho Bernardo; a community they actively embraced for over 20 years. Above all else, Hal valued family. The Altenbern clan is saddened by his passing but find com-fort in his legacy of love, best expressed in his personal and oft-repeated life motto: “Love Life and Love People”. A Celebration of Life will be held Tuesday, July 11 at 4:30 pm at the Penasquitos Lutheran Church, 14484 Penasquitos Drive, San Diego. A reception will immediately follow. The family want to extend Hal’s wish that attendees wear bright, happy colors. A private military ceremony with honors will take place Friday, July 14, at Miramar National Cemetery. In lieu of flowers, the family suggests donations to Penasquitos Lutheran Church in honor of Harold John Altenbern.

The family of Harold John Altenbern created this Life Tributes page to make it easy to share your memories.

Send flowers to the Altenbern family.