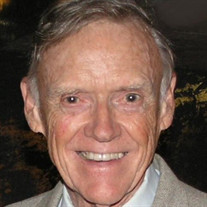 Graham K. Fleming passed away peacefully on February 17 at the age of 91. He is survived by his wife of 64 years, Evelyn Fleming, and his daughters Kathleen Fleming of Talkeetna Alaska, and Ann Fleming of Walnut Creek CA, as well as his two beloved granddaughters Megan and Renee. His only sibling Doris Scharfenberg of Michigan and Wisconsin predeceased him in 2018. Son of Muriel Keenan Fleming and LeRoy Fleming, Kim was born and raised in Detroit Michigan. After graduating from McKenzie High School he attended Hillsdale College and joined the Delta Sigma Phi fraternity. His active service in the Navy ranged from 1952-56, during which time he completed Officer Candidate School as well as Naval Justice School, served aboard the USS Talladega as Legal Officer, and was promoted to the rank of Lieutenant Commander. Handsome in his navy uniform, he married Evelyn “Lyn” Potter in 1955. After the completion of his active service, Kim attended law school at Boalt Hall, UC Berkley, and became a father in 1958. The family moved back to San Diego (Lyn’s hometown) where Kim worked in the City Attorney’s office, and their second daughter was born. While the child in him was never far submerged, Kim relished the role of daddy and the “excuse” to play. In 1965 Kim became the first full-time City Attorney of Escondido, and the family moved from Lemon Grove to a lovely home on a hill in what used to be rural north Escondido. He began a successful private practice in a small office at 605 E Valley Parkway, and retired from there in 2003. Memories of Kim/husband/dad are peppered with adventures: boating in the Sea of Cortez, dirt bikes in the desert, rafting through the Grand Canyon, cross country drives, vacations in Europe with Lyn, etc. There are many stories of close calls associated with these adventures but Kim’s good nature made it all OK. Since 1965 Kim was very active in the Escondido Rotary Club, serving as club president 2000-2001. In 2016 the club took the rare step of granting him Honorary Status. Rotarians will remark on what a kind and caring person he was with an unfailing sense of humor. He helped to write and performed in many-a-skit and witty roasting. His humor never did fail him, even near the end, with each daughter holding his hand, his ability to chuckle in response to hearing laughter definitely lingered. The family is especially grateful to long time neighbors and friends who were his treasured community, and the caregivers who, during the past 9 years, lovingly included Mr. Fleming in their family events. And thanks also to Elizabeth Hospice for making his final months and moments more comfortable. We all miss him so very much. The ashes of Graham K. Fleming will be interred at Miramar National Cemetery after a private ceremony with honors on March 12th. Friends are invited to join the family that afternoon at 2:30 for a public memorial service at Infusion Church, 777 W Felicita Ave, Escondido. Long time friend Rev. Richard Huls will officiate. A portion of the ashes will be scattered at sea. Kim’s favorite charities were the Salvation Army and the Escondido Rotary Foundation. If you are so inclined, a donation would be thoughtful, the family makes no requests.

Graham K. Fleming passed away peacefully on February 17 at the age of 91. He is survived by his wife of 64 years, Evelyn Fleming, and his daughters Kathleen Fleming of Talkeetna Alaska, and Ann Fleming of Walnut Creek CA, as well as his two... View Obituary & Service Information

The family of Graham Kimball Fleming created this Life Tributes page to make it easy to share your memories.

Graham K. Fleming passed away peacefully on February 17 at the...

Send flowers to the Fleming family.