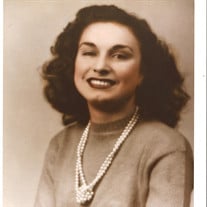 Grace (Grazia) Schioppi passed peacefully of natural causes at 8:23 a.m. on Sunday, 05 July 2015, at home in Escondido, CA, surrounded by her children and other loving members of her family. She was born Grace Moriconi on 17 July 1926 to Luigi and Angela Moriconi in Cranston, Rhode Island. She had one brother, Angelo Moriconi, and two sisters whose married names were/are Bernadine (Bessie) D’Ercole and Anna Iafrati. She married Albert Schioppi on November 22, 1947 in Rhode Island. Together they raised six children – four boys [Albert, Frank, Luigi (Lou) and Mark] and two girls [Carol and Angela]. Grace was predeceased by her parents, her brother and sister Bessie D’Ercole. Grace is survived by her sister Anna Iafrati and all of her children. At the time of her passing, Grace had 16 grandchildren, 28 great grand children and one great, great grandchild. As with many people who experienced the hardships of the Great Depression, Grace quit high school to contribute financial support to her family. She completed the requirements for a high school diploma, as an adult, while living in West Covina, CA, where she lived in the home, built by her husband, for 50 years before suffering a debilitating stroke. She made a remarkable recovery from that stroke and afterward moved to Escondido, CA, where she lived for more than 10 years. Grace enjoyed the art of needle point, making intricate quilts, braiding beautiful rugs and playing Bunko. However, the past time from which she received the greatest joy and reward was selflessly giving of herself to her spouse, children, grandchildren, great grandchildren, friends and those in need. She will be greatly missed by so many!! Funeral services for Grace will be held at Alhiser-Comer Mortuary at 10:00 a.m. on Saturday, 11 July 2015, which is located at 225 South Broadway in Escondido, CA, 92025. Visitation for Grace will be held at the same location from 5-8 p.m. on Friday, 10 July 2015, at which a rosary service will be performed. We are certain her soul will rest in peace because Grace never did anything to deliberately cause harm, suffering or disrespect to anyone. Your prayers for this very special woman are most appreciated. God bless her as well as everyone, living and deceased, who were lucky enough to have her in their life.

Grace (Grazia) Schioppi passed peacefully of natural causes at 8:23 a.m. on Sunday, 05 July 2015, at home in Escondido, CA, surrounded by her children and other loving members of her family. She was born Grace Moriconi on 17 July 1926 to Luigi... View Obituary & Service Information

The family of Grace Schioppi created this Life Tributes page to make it easy to share your memories.

Send flowers to the Schioppi family.