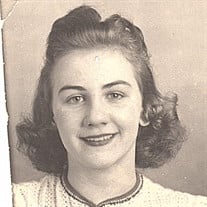 Grace Joyce Hauck, 97, passed away peacefully on July 31, 2021 in Escondido, Calif. On Saturday, July 31, 2021 the family of Grace Joyce Hauck said farewell to their beloved mother and grandmother as she passed peacefully to join her deceased parents and husband. Born December 26, 1923, in Chicago , Ill. to Rose and Edward Michaels, Grace (affectionately called Gracie) was raised in Chicago and enjoyed an active childhood of school, swimming, singing, and most important of all, a close extended family. She graduated from Austin High School and attended Northwestern University. In 1947, through mutual friends, Grace met Eugene (Gene) Hauck who had recently returned from Army Air Corps service in England. They married the following year, moving to Elmhurst, a suburb of Chicago. Gene was soon promoted by his employer, the Diamond Chain Company, to the district office in Minneapolis/Minnetonka, where the couple lived, worked and raised their two children, Lynne and Greg. In addition to volunteering, Grace, worked for the Minnetonka School District for many years before retiring to Escondido with her husband in 1983. During their busy years :in California, the couple enjoyed bridge, golf, bowling and their ever larger circle of good friends. Those who met Grace for the first time immediately became her friend for life. Indeed, on many occasions her children would hear Grace's friends exclaim, "We just love your Mother!" Years after Gene passed away, Grace lived in Cypress Court before moving to Silverado Memory Care Escondido in 2020. After many years of curiosity about our mother's full name, it has become clear why her parents chose Grace Joyce: Grace for her pure and loving soul, and Joyce, for the joy she brought to all around her. Her family and friends will say adieu for now, but never good-bye.

The family of Grace Joyce Hauck created this Life Tributes page to make it easy to share your memories.

Send flowers to the Hauck family.