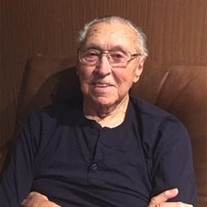 Gerrit (Gelke) Hofstee was born to Hans and Bertha (Reinstra) Hofstee in Hommerts, the Netherlands on May 23rd 1918. He passed away in his home in Escondido, California on September 15th, 2018. In the Spring of 1929, just days before his 11th birthday, Gerrit moved with his parents and four siblings (brothers Pete, Everett, and Dick and sister Klaasje) to the United States; one of millions of immigrants who passed through Ellis Island on their way to a better life. A fourth brother, Hans, was born in the United States. Gerrit’s formal education ended in the fifth grade when he began to work full time milking cows; a skill set that would stay with him throughout his life. While he worked in several professions (welder, factory worker, insurance salesman, union organizer) his first love was farming and he stayed in the dairy business well into his 70’s. Over the course of his lifetime, He farmed in Minnesota, California, and Northern Idaho. He was a member of the Western Dairyman’s Association and was honored by California Governor Jerry Brown for his work on the Board of Directors of the California Manufactured Milk Producers Advisory Board. In November of 1939, Gerrit married the great love of his life, Johanna Vander Plaats in the First Christian Reformed Church of Bellflower, California. They were married for nearly 65 years. After relocating to Worthington, Minnesota in 1944, they added a daughter, Barbara, and a son, Philip to their family. A third child, a girl, died during childbirth in 1957. They returned to California in 1965, settled in Visalia where he operated a dairy farm with his brothers. After returning to Worthington in 2002, Johanna passed away in 2004. In December of 2006, Gerrit married Jean Vander Plaats who brought much love and joy back into his life. Together they moved to Meadowbrook Village in Escondido, California to be closer to their families. He lived there until his death. Gerrit was a life-long member of the church serving in leadership roles as both an Elder and a Deacon in various congregations; Worthington Christian Reformed Church, First Christian Reformed Church of Bellflower, CA, Third Christian Reformed Church of Bellflower, First Christian Reformed Church of Visalia, CA, Trinity Christian Reformed Church of Visalia, and Escondido United Reformed Church. His Christian faith was central to his life. Always a man of great spiritual strength, dignity, grace, and humor, Gerrit will be missed by everyone whose life he has touched over the past century. He is survived by his wife, Jean; daughter, Barbara Biasi Esposito, Boynton Beach, Fl.; son, Philip G. (Marla) Hofstee, Burbank, CA.; grandson, Donald G. (Miranda) Hofstee, Lakeside, CA.; five great-grandchildren; Jean’s children, grandchildren, great-grandchildren and great-great-grandchildren; Son-in Law, Lou Biasi; and “Daughter Without Papers”, Phyllis Kanter, and many other loved ones. Memorial services will be at the Escondido United Reformed Church, 1864 N. Broadway, Escondido, CA 92026 on Saturday, September 22 at 11:00 AM.

Gerrit (Gelke) Hofstee was born to Hans and Bertha (Reinstra) Hofstee in Hommerts, the Netherlands on May 23rd 1918. He passed away in his home in Escondido, California on September 15th, 2018. In the Spring of 1929, just days before his 11th... View Obituary & Service Information

The family of Gerrit Hofstee created this Life Tributes page to make it easy to share your memories.

Gerrit (Gelke) Hofstee was born to Hans and Bertha (Reinstra)...

Send flowers to the Hofstee family.