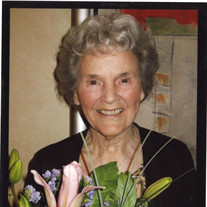 Georgia Perez was born in a logging camp outside of Coquille, OR on February 5, 1920. She passed away in Escondido, CA., on May 28th at age 95 after a courageous five year battle with Alzheimers. She was preceded in death by her husband of nearly 45 years, William Perez. Soon after WWII broke out, Georgia worked a short time in the Kaiser Shipyard in Portland, Oregon “pulling” welding cables throughout warships under construction. After that, she was summoned by her first husband, Harold Jennings (and father of her son, Gary Jennings), who had joined the war effort by enlisting in the Navy, to join him in San Diego. With Harold deployed in the Pacific, she and two of her sisters (Edith and Phyllis) found their way from the coastal town of Coos Bay, Oregon (then Marshfield) to San Diego where she went to work riveting wings on B-24 in Liberators. Her sisters took similar work, each on a different shift so one would always be home with Gary. Gary has been quoted as saying “there were times when I wondered which one of them was my mother. Actually, it seemed I had been blessed with three mothers”. She was proud to remind people of her contribution to the war effort and her honorary title of “Rosie The Riveter”. After the war, her love of adventure led her up the newly constructed (and yet to be improved) Alaska Highway. After a failed first marriage, she met the “love of her life, ”Bill” Perez, while living in Anchorage, Alaska. She survived the strongest earthquake ever recorded in North America, the Great Alaskan Earthquake on Good Friday in 1964—a 9.2 earth-moving event that lasted an incredible five minutes. During the quake, she “hugged” a storefront stanchion on 4th avenue while the earth opened up just steps away from her and entire sections of the street disappeared 20 feet into the earth. Years of travel took her and Bill to visit exotic places such as China, the Philippines and Japan, as well as short residences in Guam and Hawaii. She and Bill retired in the San Diego area in 1978 where they lived out their years enjoying being close to their extended family. Georgia was preceded in death by her husband, William Perez, four sisters, Loretta, Stella, Edith and Phyllis, and one brother, Everett Davenport. Surviving her are her son Gary Jennings (Susan), Valley Center, CA; daughter Henrietta Staser (Greg), Anchorage, Alaska; seven grandchildren Eliza Steeple (Jay); Jennifer Gross (Dan); Daniel Jennings; Michael Jennings; David Jennings (Evelyn); Amber Riggs (Joe); Lindsey Winchell (Rob); 14 great, grandchildren; and five great, great, grandchildren. Other survivors include one sister Dora Lee (Gene), McMinnville, Oregon; and numerous nieces and nephews.

Georgia Perez was born in a logging camp outside of Coquille, OR on February 5, 1920. She passed away in Escondido, CA., on May 28th at age 95 after a courageous five year battle with Alzheimers. She was preceded in death by her husband of... View Obituary & Service Information

The family of Georgia Elizabeth Perez created this Life Tributes page to make it easy to share your memories.

Georgia Perez was born in a logging camp outside of Coquille,...

Send flowers to the Perez family.