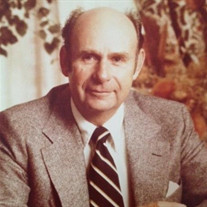 George Cullen Barber, 98, passed away peacefully in his home on Saturday, August 29, 2015 following a brief illness. His wife, Sue, was by his side. Mr. Barber, the eldest of five siblings, was born in Paterson, NJ, on May 22, 1917. He graduated from Eastside High School in Paterson and then worked for the New York Life Insurance Company in New York City prior to being accepted to the University of Virginia School of Engineering., where he earned a Bachelor’s degree in mechanical engineering in 1942. Upon graduation he was accepted into the United States Navy’s Officer Candidate School. Mr. Barber was one of this nation’s “Greatest Generation,” serving in World War II in the South Pacific aboard the aircraft carrier USS Lexington. Following active duty, he continued to serve as an inactive reservist for the next 20 years. In 1946, Mr. Barber was accepted into Harvard Business School where he earned a Master of Business Administration degree. He then worked for Otis Elevator Company for four years until being hired by Anchor Hocking Company, the second largest supplier of glassware in the U.S. He remained with Anchor Hocking for the next 32 years, holding various leadership positions, culminating in his position as President and Chief Executive Officer, and later Chairman of the Board and CEO. He retired in 1982 and moved to San Diego. A lifelong avid golfer, Mr. Barber and his wife were members of the Country Club of Rancho Bernardo for more than 20 years. He was also an accomplished gardener, known and loved locally for his beautiful flowers and luscious tomatoes. “George was a great man and the love of my life,” said Sue Barber. “I know he’s in heaven right now, planting his garden with the help of his angels.” Mr. Barber was predeceased by his parents, George and Ruth Shaw Barber, and his four siblings, Jack, Don, Bruce and Marilyn. He is survived by his wife, Sue; sons, Jeff (Pam) of Houston, TX, Bruce A. (Jeanne) of Lee’s Summit, MO and Douglas (Eriko) of Marietta, GA; grandchildren, Jeremy (Teisha), Lauren (James) Hammond, Jordon, Ian and Ema; one great-grandson, Everett; and by his wife’s children and families all of Lancaster, OH, Kevin (Christina) Hall, Robin Sue Hall, and Craig (Elizabeth) Hall; grandchildren, Ryan, Connor, Marissa, Derek (Rachael) and Whitney Hall (Trevor) Griffith; and one great-grandson Torren Hall. A Celebration of Life is planned in Lancaster, OH, next summer for family and close friends. The family suggests donations in Mr. Barber’s memory be made to The Elizabeth Hospice, 500 La Terraza Blvd., Ste 130, Escondido, CA 92025; the Fairfield Heritage Assoc., 105 E. Wheeling St,. Lancaster, OH 43130; or charity of choice.

George Cullen Barber, 98, passed away peacefully in his home on Saturday, August 29, 2015 following a brief illness. His wife, Sue, was by his side. Mr. Barber, the eldest of five siblings, was born in Paterson, NJ, on May 22, 1917. He graduated... View Obituary & Service Information

The family of George Cullen Barber created this Life Tributes page to make it easy to share your memories.

George Cullen Barber, 98, passed away peacefully in his home...

Send flowers to the Barber family.