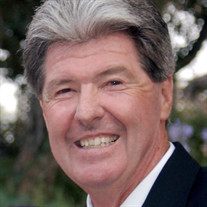 Death is nothing at all. I have only slipped away to the next room. I am I and you are you. Whatever we were to each other, That, we still are. -Henry Scott Holland Our beloved Gary Ralph Cook passed away on January 8, 2022. He was born on June 4, 1947, in San Diego, California, to C. Ralph and M. Jean Cook. Raised in San Diego and Escondido, Gary was part of the first graduating class of Orange Glen High School in 1965. After high school, Gary attended California Lutheran University in Thousand Oaks, California, graduating with a bachelor's degree in finance. Following his graduation, Gary was drafted into the US Army and did one tour in Vietnam before receiving his honorable discharge in 1972. Once home from Vietnam, Gary worked as a bartender and lived in Northern California, before returning to San Diego to begin his career in Health Care Administration. After his return to San Diego, Gary met the love of his life, Patricia Jean Cook in 1975. After a brief courtship, they were married in Las Vegas, Nevada in 1976, and settled in Escondido, California. During the early years of their marriage, Gary and Pat embarked on the experience of a lifetime and sailed to the South Pacific with his uncle Jim McFeron and family. After their return from Tahiti, Gary and Pat spent their lives in Escondido. Gary worked at Crest View Manor and Valle Vista Convalescent Hospital, while he and Pat raised their twins, Tyson and Marquesa. Throughout his life, Gary fostered and cultivated relationships throughout San Diego, working as a health care administrator for fifty years. He was a family man who tirelessly supported his family and friends. During his life, Gary enjoyed reading, golfing, surfing, Rotary, hiking in Yosemite, family vacations with the ski boat, and trips to Lake Powell. Gary also enjoyed doing community work and had an avid interest in classic and exotic cars. During the last several years of Gary’s life, he traveled and realized his lifelong dream of buying a home on the golf course in La Quinta, California. While in La Quinta, he loved entertaining family and friends and sitting on his patio. Gary was an incredible man who lived an amazing life. He was a pillar of strength for his family, and loved being a husband, father, and grandfather. He will be deeply missed. Gary is preceded in death by his wife, Pat; his father and mother, Ralph and Jean Cook; and sisters Barbara Johnston and Patti Jo Miles. Gary is survived by his son Tyson Cook, his wife Jenni and their daughter Harper; and his daughter Marquesa Cook-Whearty, her husband Brandan and their children Mara, Macallan, and Maeve. A viewing for Gary will be held on Monday, January 17th from 5:00pm-8:00pm at Alhiser-Comer Mortuary in Escondido. A graveside service will be held at 11:00am on Tuesday, January 18th at Dearborn Memorial Park in Poway, with reception for family and friends to follow at Stone Brewing World Bistro and Gardens in Escondido. In lieu of flowers, consider making a donation to your favorite charity in honor of Gary.

Death is nothing at all. I have only slipped away to the next room. I am I and you are you.... View Obituary & Service Information

The family of Gary Ralph Cook created this Life Tributes page to make it easy to share your memories.

Death is nothing at all.
I have only slipped away to the next...

Send flowers to the Cook family.