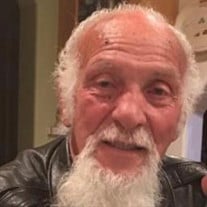 Gabriel Montoya Villalobos passed on peacefully Monday, July 1, 2019 surrounded by family. He was a beloved husband, father, grandfather, brother and friend. Gabriel was born March 24, 1931 to Pablo Villalobos and Desideria Montoya Villalobos. His father was born in Santa Maria, Jalisco Mexico and his mother was born in San Juan De Los Lagos, Jalisco Mexico.. They both entered the United States by way of Arizona with work visas. They met in Orange County California and eventually married. . They found their way to the beautiful valley of Escondido. There Desideria gave birth to Gabriel, their first child, their first son, and their first generation American child. Gabriel would become the eldest of 15 children in the Villalobos family, 11 boys and 4 girls. His abuelita Basilisa would call him mi muchachito de oro, which means - my little golden boy, because of his blond hair. His families history of migrating to the United States of America, always was an honor to him, and he loved America because of the freedoms, security, opportunity and countless blessings that were bountiful here in America. At 13 years old, Gabriel was taught how to harvest oranges. As the years progressed and other brothers were growing up, they would as a family travel to Orange County, California during the summer months and harvest the oranges . Gabriel attended Central School, and also Escondido High School. In 1950 at 20 years old he worked at a poultry company in Escondido, Myers Chicken Processing Plant, where he drove a truck to various chicken ranches and picked up and hauled turkeys and chickens to the chicken plant to be dressed and processed. Two years later in 1952, he began his 37 year career at Talones Meat Packing Co. in Escondido. There he learned the skill of slaughtering cattle, and processing beef. He became the foreman on the kill floor in 1964. His crew consisted of 30 men who most became life time friends. Gabe retired from his career at Talones in 1988. Gabe also had a part time custom cattle slaughtering business, which he conducted on the weekends. He routinely took his two younger sons, with him, and they helped with the process. Gabe was introduced to the sport of game hunting of deer, rabbit and other game in the early 1950’s. It soon became a lifetime passion, along with fishing. In 1959, he began collecting various guns and would continue collecting and adding firearms all his life to his collection. There was no other place he would rather be than camping at Indian Flats camp ground in Warner Springs, CA. He loved the outdoors, and all it entailed along with the friends that camped along side him. In 1989 he and his brothers began an annual tradition of traveling together to Bishop Ca. to camp and fish. Their favorite lakes to fish at were Rock Creek , Intake Two, South and North Lakes. He loved his brothers and fishing. He often said that he had some of the best time of his life there with his brothers. In the early 1970’s Gabe purchased a 1941 Wyllis Jeep. He would tow the jeep to Mayfield Utah and utilize it while hunting deer and elk in the mountains. His jeep would become one of the things he was known for as he drove it around his city of Escondido. It was sold in 2016, to everyones surprise. In 1959, Gabe purchased his home high on a hill on Sheridan Avenue overlooking the beautiful hidden valley of Escondido. The view from his back deck was mesmerizing and enjoying it daily was his solitude. There his 6 children were raised among the avocado and orange groves. He especially took pride in his mango tree that was there in his grove when he purchased the home and he nurtured and cared for it until his passing. He was very generous with the annual harvest of mangos . His mango tree is 65 years old. He was the king of his hill. Gabe enjoyed spending time at the local casinos, not just for gambling but the social interaction and good meals. Gabe and his brothers had their favorite hang out - Petersons Donuts. They frequently enjoyed each others company there along with a cup of coffee and a donut. Cruisin Grand on Friday nights with his brothers was more than a thrill to him. He always felt like a celebrity while cruisin down the heart of Escondido. He married the mother of his children, Carmen Minjares Villalobos, and he became a father in 1951. Gabriel became the father of 6 children, 3 boys and 3 girls. He taught his children amazing work ethics, as most can never remember him missing a day of work in 37 years. In 1983 Gabriel married Eloise Sanchez Villalobos, the woman who would love him and care for him for 35 years, until his passing. He would gain one more daughter with this marriage. He is survived by his wife of 35 years, Eloise Sanchez Villalobos, his son Gabriel Leonard Villalobos, his daugher Margie Rose Powell, his daughter Mary Ellen Alegre, his daughter Kathleen Lucille Herwaldt, his son Valentin Gerard Villalobos, his son Vincent Mario Villalobos and his step daughter Eileen Collins, his brothers and sisters, Paul Villalobos, Ernie Villalobos, Nicho Villalobos, Louie Villalobos, David Villalobos, Johny Villalobos, Roy Villalobos, Albert Villalobos, Lupe Cortez, Mary Espinosa, Rachel Villareal and Becky Phillips. He had 18 grandchildren and 19 great grandchildren. Gabriel was a devout Catholic, and now resides with our Lord and Saviour Jesus Christ. He touched lives with his happy and care free outlook to life, and will be missed by many. Gabriel will be honored at his Celebration of Life on: Monday, July 29, 2019

The family of Gabriel Montoya Villalobos created this Life Tributes page to make it easy to share your memories.

Send flowers to the Villalobos family.