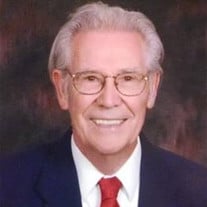 Dr. Frank Daniel Lowrey was returned to his heavenly home on September 16th, 2017. His devotion to his family and his firm belief in God supported him and ultimately gave him peace. Frank was born on July 8, 1924, in Proctor, Minnesota, the son of Vincent and Albina Lowrey. Frank and his sister, Genevieve, were raised in Duluth, Minnesota. In 1938, after the accidental death of their father, they moved with their mother to Los Angeles, California to be near family. Frank graduated from Loyola High School, and subsequently joined the United States Navy in 1943 during World War II. It was during his military service that he was introduced to Dentistry. After serving in the Navy, he earned a Bachelor of Science Degree from University of Southern California where he completed his Pre-Dental studies. He later attended Washington University in St. Louis, Missouri where he received his Doctor of Dental Surgery (DDS) Degree. Upon completion, he moved to Buckeye, Arizona where he established his dental office where he practiced for nearly 44 years. Frank was known by many as “Doc”. Frank was an avid private pilot who owned multiple airplanes throughout his life. In addition to flying all over the Southwest he loved to fly to Mexico for the excellent fishing and culture. On one such trip Frank met Maria and they married in 1974. Frank and Maria made Buckeye, AZ their home where they raised their daughter, Ericka. After Frank retired from practicing Dentistry in 2006, he and Maria decided to move closer to their daughter in Escondido, CA. There they lived with Ericka, son-in-law, Chad, and their three grandchildren, Xavier, Dominic and Camilla. Frank’s life was guided by a devotion to the Catholic Faith. He was a 4th Degree with the Knights of Columbus and parishioner at the Church of the Resurrection. The funeral has been arranged for Wednesday, September 27th at Church of the Resurrection in Escondido, CA beginning with the Viewing from 11am-12:30pm, Rosary at 12:30pm and Mass at 1pm, with a reception to follow. Military funeral honors have been arranged for Thursday, September 28th at 11am at Miramar National Cemetery. The services will be officiated by Father Ken Del Priore. Donations may be made in his name to Knights of Columbus #9897.

Dr. Frank Daniel Lowrey was returned to his heavenly home on September 16th, 2017. His devotion to his family and his firm belief in God supported him and ultimately gave him peace. Frank was born on July 8, 1924, in Proctor, Minnesota, the... View Obituary & Service Information

The family of Dr. Frank Daniel Lowrey created this Life Tributes page to make it easy to share your memories.

Dr. Frank Daniel Lowrey was returned to his heavenly home on...

Send flowers to the Lowrey family.