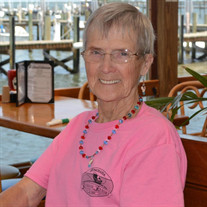 Eva Mae Latz, born as Eva Mae Hall on December 22, 1938 and she left this world on November 7, 2020. She was married to Joseph G. Conboy for the majority of her life when she raised five children, Diana Lynn Knapp, Joseph Michael Conboy, William John Conboy, David Lee Conboy and Kenneth “J” Conboy. She is survived by only two of these children, Diana Lynn Knapp and Kenneth “J” Conboy. She is also survived by 10 grandchildren, Christopher Scott Knapp from her daughter; Heather Rae Cross, Tresa Mae Pippin, Kenneth “J” Conboy, Jr., and Cheyenne Elizabeth Conboy from her son Kenneth “J” Conboy; Joseph Conboy, Emily Conboy, Joshua Conboy, and Eva Conboy from her son David Lee Conboy; Melissa Groesser from her son William John Conboy. Eva is also survived by 7 great-grandchildren, Jackson, Payton, Bishop, Embrey, James, Eddie and Shawn. She is also survived by a step-daughter, Robin Burchfield. Eva’s life was one of great kindness and devotion to family, friends and America. She loved to bake and gave away her baked goods to neighbors and friends. As her grand-daughters became older, she enjoyed baking with them. Eva was known for her pumpkin bread recipe which everyone wanted and it was something that the grand-daughters had an age limit on as to when they could get it. Her Christmas cookie trays were waited for with great anticipation, as she made one for every family. She prepared cookies and candies and sent them over seas when her youngest son was serving as a Marine, and then again when her first grand-son served in the Navy. Both of Eva’s husband’s served America in the service. Eva was very patriotic, and believed in serving the country and the servicemen through working at the American Legion. Once again her baking, and cooking skills came into action as she would make cookies, pies and cakes to take to naval hospitals. She would also sell them at bake sales to raise funds for various causes. She also loved to be involved with the children at the Legion through scholarship programs for nurses, and being Mrs. Claus at the holiday parties. She absolutely Christmas. She would have parties for her friends and families and her home would be filled with such joy. Once again her baking and cooking skills came into action. You never left her home hungry. Eva’s life in the American Legion was one of great accomplishment. She served as President of the Auxiliary multiple times. She loved the poppies and what they stood for, and she turned them into corsages, bouquets, center pieces, anything to show them off. She went on to do the same sort of work for the 8/40 and was the local Chapeau and the La Chapeau for the state. It was one of the happiest days of her life for her and Joseph Conboy. Serving, that is what she liked to do, anything to serve. She would do anything asked of her, and she loved being with the ladies of the Auxiliary and 8/40 where she found like-minded women, served and laughed. She enjoyed crafts also. She made Mr. and Mrs. Claus out of Ivory soap bottles. Snow people out of snack pack udding cans, Angels out of safety pins. All of these treasures and others were made with such loving hands, and her sweet spirit. Eva’s family was the most important thing to her, Thanksgiving, Christmas, birthdays, any important day she wanted it to be at her home. Proms and weddings, she made corsages, center pieces, and other arrangements, anything that was necessary, as she loved flowers, real or silk. Later she was the teacher to help grand-daughters to learn about flowers as they started to make their own bouquet’s. She even made bouquets and arrangement for her own wedding to Harvey Latz. She was talented. There are so many great things about Eva, (1) is her hug, (2) her kisses, (3) her smile, and (4) her laugh. Even at the end with all she went through she would still offer all of these. She will be missed by all her knew her. Since there will not be a public service, the family requests that in lieu of flowers donations be made to the American Legion Post 149.

Eva Mae Latz, born as Eva Mae Hall on December 22, 1938 and she left this world on November 7, 2020. She was married to Joseph G. Conboy for the majority of her life when she raised five children, Diana Lynn Knapp, Joseph Michael Conboy, William... View Obituary & Service Information

The family of Eva Latz created this Life Tributes page to make it easy to share your memories.

Send flowers to the Latz family.