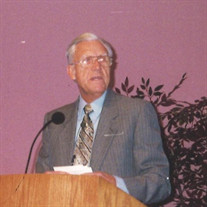 Isaiah 41:10 Do not fear, for I am with you; do not be dismayed, for I am your God. I will strengthen you and help you; I will uphold you with my righteous right hand. The righteous right hand of God was held out to Eugene Oliver Ongna as he entered the gates of heaven on Christmas Day, 2020. Gene was born on November 20th, 1930, to Clarence and Helen Ongna. Pastor Gene grew up as “Pasture Gene.” He grew up on their dairy farm in Sheboygan Falls, Wisconsin, along with his brother Calvin and sister Janice. Gene accepted Christ as his personal savior as a teenager and pursued a life of ministry after graduating from Northwestern University and Trinity Seminary. While at Northwestern, he met and fell in love with his forever sweetheart Maybritt. She was beautiful, funny, and boy could she cook. Gene couldn’t resist, and they were married on August 10th, 1957, and raised 3 daughters together. He pastored 4 Evangelical Free churches (Moline, IL, Arlington Heights, IL, Yorba Linda, CA, and Green Valley, AZ) over 45 years. His relationship with Jesus Christ was personal and intimate and he loved studying, memorizing, and teaching the Word of God. He was easy to shop for: give him a stack of books and some chocolate turtles, and he was happy. Gene was a committed man. He was a lifelong fan of the Los Angeles Lakers, the Green Bay Packers and was a long suffering Chicago Cubs fan. He was such an avid fan that even when the Cubs won the World Series, he could barely get himself to watch, expecting yet another disappointment. He enjoyed walking, playing golf and tennis. He never lacked for a quick-witted response, a poem, or smart aleck comment. His jokes were well worn, overused, and always hilarious. However, his greatest passions after serving Jesus were his wife and three daughters. If Gene had a late-night board meeting, you could bet he was home early in the afternoon to spend time with his family. He knew that his family would be his legacy. Gene and Maybritt moved into Meadowbrook Retirement Villages in 2013, and although retired, they continued to minister to those around them. Gene prepared and preached Sunday Services to the residents who were unable to attend church and he led weekly sing-alongs. He pursued a life of significance over success and challenged those he loved to do the same. Gene is survived by his wife of 63 years, Maybritt Ongna; their three daughters: Michelle Cunningham (Ed), Roxanne Weller (Dave), and Jilane Hawkins (Jack) and seven grandchildren and his sister Janice Ongna. He is currently celebrating a great reunion in heaven with his parents and his brother Calvin. A private graveside service is being held on January 4th, and a Celebration of Life Service is being planned for Spring 2021. In lieu of flowers please make donations in Eugene’s honor to the Evangelical Free Church Denomination: https://www.efca.org/give

Send flowers to the Ongna family.