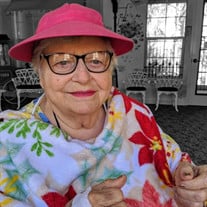 Born in Montana on December 29,1934 to Remo Vicario (Lead, South Dakota) and Marguerite Rundell (Butte, Montana). Remo was a concrete contractor who worked on the Hoover Dam before moving his family to Long Beach, California in 1937, then to La Crescenta, California. As a child, her father insisted she learn an instrument. She chose the trumpet. He told her she could quit as soon as she could flawlessly play “Flight of The Bumblebee”. She did. Elsie attended Glendale High School, where she met her lifelong friend Ravee Rowley. She worked doing accounting at the Montrose Pharmacy before briefly living in San Francisco. She returned to southern California, and began escorting a friend to visit her friend’s fiance at Camp Pendleton, California. Her friend’s fiance brought along his friend Lawrence Place. Upon meeting Lawrence, he told her she was going to marry him. Of course, she told him he was crazy. A few months later, they were engaged. He was in the process of converting to Catholicisim when they accompanied their friends to Yuma, Arizona to elope. Their friends backed out, and Elsie and Larry stepped up. He said, “We didn’t come all of this way for nothing”, and they were wed at Gretna Green’s Wedding Chapel in 1955. They eventually settled in the San Fernando Valley in California, and began their family. There were many family gatherings with her sister Shirley, brother-in-law James (Jim), their children Jeff, Tim, Linda, Lisa, Ken, and Sue; Great Aunt Eda (banana), cousins Joanne, Rosalie, and Julie. Family vacations usually meant camping. Elsie loved entertaining. She made it look effortless. She was a master organizer, anticipator and planner, except when she would find the Christmas gifts she hid from you in July. Every holiday was an event. She enjoyed seasonal decorating, but cooking was her passion. Her grandfather was a chef at the Huntington Hotel in San Marino, California. He cooked elaborate weekend dinners, which he started cooking in the early morning hours. Elsie and her sister Shirley spent quite a bit of time doing the many dishes which each course was served on. Aunt Eda usually led the charge. She had many fond memories of those times, and the comradery (and much laughter) of the women in the kitchen. Elsie’s signature dishes were: lasagna/manicotti, stuffed bell peppers, anything Thanksgiving, prime rib and Yorkshire pudding, and DeeAnn’s favorite sour cream twists.Her weekend brunches on the family patio were spectacular and relaxing. She was ahead of her time, as she scoured through magazines on the hunt for new inspiration and recipes. She was fearless and patient in the kitchen. Her favorite activity was nurturing those she loved with food. Her go to remedies when anyone was sick were: Ginger Ale, saltine crackers, broth, Jell-o, 7-Up, Vicks Vapor Rub, and a steamy shower. If you were ill, she was on a mission to get you better. Elsie’s other favorite activities included listening to music/dancing, sewing, painting, bowling, and playing cards. Nearly each weekend consisted of card games with their friends the Gorrindos and the DeMeos. Everyone looked forward to her cooking, laughter and hospitality. She had a magnificent head of hair that most people envied. Her beauty routine consisted of hair, lipstick (Revlon Desert Frost Pink) and brows. She was simple, but stunning. Her smile lit up the room, but her heart was even more lovely. She had a way of spotting those who needed nurturing. Her remedy was usually food. A trait she passed along to anyone she could. She had a way of making everything look rosy. Her face would light up when she saw you or any of her favorite animals (bunnies and dogs). A few of her dogs were Tino, Fluff, Lola, Duchess, and Tootsie. Later on, she would request Larry drive her over to visit Benji. She absolutely loved when animals would roll over and let her pet their “tummies”. Elsie lived out her last year at Silvergate Memory Care in San Marcos, California. Her favorite activities there included Bingo and pet therapy (bunnies, dogs, birds, and miniature horses). Her treats consisted of hot dogs, milk and Diet Pepsi. She always loved a visit from Coach Vance- no matter what character she was dressed as seasonally. Her favorite nurse was Maryanne. Elsie passed away exactly one year to the date of Larry’s stroke, and will be memorialized on the anniversary of his death one year ago. Their bond was quite strong, and one we will never fully understand. In the end, she was waiting for him to come and get her. Her loving daughter DeeAnn was with her, and explained he was waiting for her in Heaven. It was then, that she chose to leave. Elsie is survived by her children DeeAnn Place Clark (husband Donald), grandchildren Alexander Clark (fiance Laura) and Adam Clark; Darrell Place (wife Leigh); and Michelle Place (husband Erik Gaieski); sister Shirley Vicario Goeppner (husband James), her family Jeff, Tim, Linda, Lisa, and Suzanne.

Born in Montana on December 29,1934 to Remo Vicario (Lead, South Dakota) and Marguerite Rundell (Butte, Montana). Remo was a concrete contractor who worked on the Hoover Dam before moving his family to Long Beach, California in 1937, then to... View Obituary & Service Information

The family of Elsie Mae Vicario Place created this Life Tributes page to make it easy to share your memories.

Send flowers to the Place family.