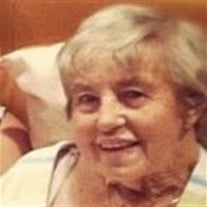 Elizabeth Lindsay Sproul known as “Lizzie Lindsay” in her younger years died January 12, 2015. Survived by children and children-in-law, William, Elizabeth (Scott), Margaret (Jim), Louise (Carlo), George, David (Chelsea). Grandchildren –Elizabeth, Alison, John, Rachel, William, Kathryn, Alesia, Lindsay, Ainsley, Federica, David, Tristan, Colin, Braden and Great-granddaughter Evangeline. Sister-in-law, Janette and nieces, Eileen, Ann, Maureen and John (Julie). Grandnieces and grandnephews – Robert, William, Lauren, Shaun, Sean-Michael, Makenna and Alexandra. Nieces residing in Scotland-Kathryn, Lorraine and Diane. She is preceded in death by her husband, David, parents, William and Elizabeth Jordan Lindsay, and brother, William. She was born in Glasgow, Scotland on March 10, 1934. She attended Notre Dame High School and then Skerry’s College of Business. After finishing school in 1952, she worked at the South of Scotland Electricity Board as a clerk. She was very talented in music, making two records and sang with the British Broadcasting Corporation, dedicating her songs to those rehabilitating in prison. She was also on stage with the Covent Garden Opera Company and soloist for her church choir in Glasgow. She met her future husband, David Sproul, while working at Mirrlees Watson Company through a mutual friend. They dated three years and were married at St. Vincent de Paul in Thornliebank, Scotland on June 18, 1960. They set up their residence in Glasgow, and then Penicuik but moved to Newcastle, England, and finally immigrated to the United States. They made San Diego, California their permanent home until David’s sudden death at the age of 39 in 1970. Left with six young children, Elizabeth went to work for the San Diego County as an Eligibility Technician. She had a devout Catholic faith and ensured that all her children had a Catholic education. She was involved in many church functions and took great pride in being involved with Cursillo for many years. She was a parishioner for many years at Our Mother of Confidence, and is a current parishioner at St. Mary’s in Escondido. She was a wonderful mother and grandmother, as well as hero to many as she thrived as a young widow. She had a way of attracting others by her kindness and thoughtfulness and always wanted to help others. She was involved with an organization called “The Buddy Program” through the County of San Diego to assist those with AIDS. She was dearly loved by family and friends, and her homemade shortbread was a known favorite by all. She made it a priority to be involved in her grandchildren’s events and was at every award ceremony, school program, Grandparent’s Day, graduation and birthday party as well as spending many weekends and vacations with them. She was a good sport about being dragged to all their sporting events. She was an idol to all of them and fondly named “Gran”. A rosary will be held on Tuesday at 7:00 pm at the Alhiser-Comer Mortuary (Escondido), with a viewing from 4:00 p.m to 8:00 p.m.. The funeral mass will be held on Wednesday, 11:00 a.m. at St. Martin of Tours in La Mesa; with burial to follow at Holy Cross Cemetery.

The family of Elizabeth Lindsey Sproul created this Life Tributes page to make it easy to share your memories.

Elizabeth Lindsay Sproul known as “Lizzie Lindsay” in her younger...

Send flowers to the Sproul family.