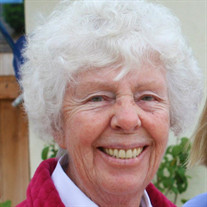 Eileen Julia (Higgins) Driscoll Devoted nurse, caregiver, author, and loved one. Eileen Julia (Higgins) Driscoll, 89, died Wednesday, November 18, at Palomar Medical Center with her family by her side. Eileen was born July 28, 1926 in Brooklyn, New York to Thomas George Washington Aloysius Higgins (1896-1970) and Catherine Julia (Greene) Higgins (1901-1975). In 1947, she graduated from the Saint Mary’s Hospital School of Nursing and was licensed by the University of the State of New York in 1948. She worked in the medical field in New York and Florida until her retirement in 1989. She met her husband Jerome (Jerry) Martin Driscoll in 1950 and they were married on November 9, 1953 in Brooklyn, New York. They had 28 wonderful years together until his death in 1982. After her retirement she worked part time as an activity assistant at an Alzheimer’s day care center which led to her writing her book Alzheimer’s: A Handbook for the Caretaker, published in 1994. She continued writing poems and stories about her life and was published in many magazines until her passing. Eileen also loved the Escondido Public Library and volunteered there for years. She was preceded in death by her parents, husband, Jerry (1920-1982), her sisters, Kathryn Schmitt (1929-1997), Virginia LeBlanc (1930-2006), AnnMarie (1934-1934), Barbara Earwicker (1938-2011), and her brother, Michael Higgins (1943-2015). She is survived by her brother, Thomas Paul Higgins, and many nieces and nephews and cousins who loved her. Services will be held at Alhiser-Comer Mortuary on Saturday, November 28, 2015 at 2:00 pm. Her ashes will be buried with her husband, Jerry, at Calvary Cemetery in St. Petersburg, Florida. In lieu of flowers, donations may be made to the Escondido Public Library, 239 S. Kalmia St., Escondido, CA 92025.

The family of Eileen H Driscoll created this Life Tributes page to make it easy to share your memories.

Send flowers to the Driscoll family.