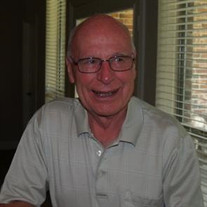 Ed Niehaus, son of Edward Niehaus and Mabel Silar, passed away at the age of 90 after a heroic battle with cancer. He was married for 35 years to Mary Jo Storte, who preceded him in death in 1983, and for 7 years to Carole Woods Matthews, who preceded him in death in 1991. He is survived by Barbara, his wife of almost 25 years and so many others who loved him: his five children with Mary Jo – Janice Olive (Sam) of Williamson WV, Steve Niehaus (Debbie) of Amarillo TX, Laura Prewitt (Mike) of Santa Rosa Beach FL, Carole Gillett (Jonathan) of Fort Worth TX, and Alan Niehaus (Mary) of Destin, FL; Barbara’s 6 children who welcomed him as their stepfather – Cathy Gregory (Leonard), John Dyrek, William Dyrek (Milka), Anne Robbins (Jimmy), Mary Klein, Linda Parnell (Shannon), all of whom reside in California; his sister Ruth Grammas (John) of Long Island, NY; 15 grandchildren and 6 great-grandchildren; and numerous other relatives near and far. Born in Pittsburgh, PA, Ed led a fulfilling life and leaves a broad legacy. He enlisted in the Navy at the age of 17 to serve his country in World War II, and was assigned to the USS Pensacola in the Pacific. After the war, Ed demonstrated his belief in hard work and stretching yourself as far as you can – obtaining his GED and then his BS in Mechanical Engineering at the University of Pittsburgh at night, all while working a full time job during the day and raising his family. Ed joined Rockwell International in 1955, starting as a draftsman and eventually becoming Chief Engineer in the Power Tool Division. It was at Rockwell where his genius became visible, as evidenced by 13 patents for his designs of power tools. He is widely credited in the woodworking industry as the inventor of the miter saw. Ed and his family moved from Pittsburgh to Tupelo MS in 1969 where he lived the “southern life” first with Mary Jo and his children and then later with Carol, until he met and married Barbara, ultimately settling in Escondido CA in 1992. The example Ed set for his family and friends is par none – whether at work or play -- with his patriotism, his eternal optimism, his calmness, his work ethic, his devotion to the Catholic faith, his love of travel, or his tenderness and caring for those around him. Everyone who knew him will miss him and cherish the time we had with him. A memorial funeral Mass and military honor ceremony will be held at the Church of St. Timothy’s in Escondido on Tuesday, October 4, at 10:00. Viewing will be Monday, October 3, at Alhiser - Comer Mortuary, 225 S Broadway, Escondido from 4:00 until 7:00, with a vigil service and rosary at 7:00. A private burial will be at the Miramar National Cemetery on Thursday, October 6. One of Ed’s favorite moments was when he was selected as part of the Honor Flight from San Diego in 2011 to see the World War II Memorial. In lieu of flowers, the family would appreciate donations in Ed's name to Honor Flight (see https://www.honorflight.org/donate-now/).

Ed Niehaus, son of Edward Niehaus and Mabel Silar, passed away at the age of 90 after a heroic battle with cancer. He was married for 35 years to Mary Jo Storte, who preceded him in death in 1983, and for 7 years to Carole Woods Matthews, who... View Obituary & Service Information

The family of Edward J. Niehaus Jr. created this Life Tributes page to make it easy to share your memories.

Send flowers to the Niehaus family.