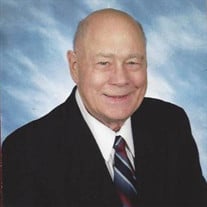 Edmund Theodore Dombrowski was born on October 3, 1930 in Inglewood, California to Violet Yolanda Margarita Muto Dombrowski and Edmund Theodore Dombrowski, Sr. Violet was a home maker of Italian descent )1st generation American) and Edmund was a tool and dye maker and later a commercial orchid grower of Polish descent. Edmund was born at home in the house build by his father and uncle. When he was two years old, Ed fell in the kitchen injuring his right knee. He was hospitalized at Los Angeles County hospital where an incorrect diagnosis of Tuberculosis of the knee joint was made. His knew had become swollen and red and he ran a high fever. Eventually, his mother Violet took him home against the doctor’s orders-as he was still running a high fever. That night, faith healers came to the door and asked to stay and pray for Ed. In the morning, Ed’s temperature was gone and he recovered, but was left with a damaged knee for life. He grew up with his younger brother Stephen Raymond learning many trades. Their father built a shop in the back yard for his tool and dye work. He did tool and dye work for airplanes build for World War II. Ed attended school in Inglewood. In high school he was an excellent student and excelled in water polo and swimming as well as academics. He received varsity letters in polo and swimming. He also won the American Legion Outstanding Student Award. In 1948, he attended UCLA as a premed student where he continued to excel in water polo, competitive swimming, and academics. In 1952, he was accepted to UCLA School of Medicine. He graduated in 1956. After a years internship at St. Joseph’s Hospital and Denver General in Denver, Colorado, Ed attended the Mayo Clinic in Rochester, Minnesota. He completed a four year residency in Orthopedic Surgery. On September 14, 1957, he married Eleanor Lucile Ragan and a year later started a family in Rochester, Minnesota. Edmund Theodore III was born in 1958. Kathleen Ann (1959) and Linda Lee (1960) were also born during his residency at the Mayo Clinic. In 1961, he entered the U.S. Navy at Great Lakes, Ill for a two year tour of duty as a Lieutenant Commander. In 1963, Mark Steven was born at Great Lakes Naval Hospital. In the summer of 1965, the family moved to Redlands, California where he joined the Beaver Clinic for one yar, followed by 32 years of Private Practices as an Orthopedic Surgeon specializing in back revisions surgeries followed by 12 years as a worker’s comp evaluation and expert witness. Deborah Lucile Yolanda was born at Redlands Community Hospital in 1970. During his years of living in Redlands, he became involved in many activities contributing to the betterment of his city and country. Her served as the chairman to save Prospect Park and was instrumental in persuading Mrs. Mary Kimberly Shirk to donate her home as a living museum to the people of Redlands. He secured both her home and Prospect Park for the enjoyment of future generations. He served as Republican County Chairman for San Bernardino County for several presential campaigns. He donated countless hours and energy to the campaigns for Nixon and the Reagans (two elections). He developed several new ideas and contributions to the field of medicine. Spinal Stenosis was unheard of when he first started recognizing this severe back problem He was the first to find a cue for Osteomyelitis with hi irrigation/suction treatment. His Positioning Surgical Clip invention for spine surgery has been used by many back surgeons and is still in use today. He taught Greg’s Anatomy to students at Loma Linda University and served on the faculty. He helped develop Loma Linda Community Hospital and was instrumental in its becoming a notable hospital. He helped develop the concept of post hospital care facilities with the advent of shortened hospital stays and post op patients still needing bedside care. Above all he served as a compassionate, caring physician to him many thousands of patients over the many years he practiced, He was always there to help his fellow man. In 1969, the family joined the LDS church where he served as a Gospel Doctrine Teacher, a Seventy, and the spiritual leader of his family. He is loved and respected by all who have had the priviledge of crossing his path in this life. He is survived by his children Kathleen Ann, Linda Lee, Mark Steven (Lorna), Deborah Lucile Pry (Greg) and his daughter in law Jeanine Dombrowski Eldredge (Edmund T. Dombrowski III, deceased). He is also survived by his 9 grandchildren Rachael Strawn (Cameron), Rebecca Rios (Joshua), Steven Dombrowski, Jenny Watson (Ky), Kendall Konecki (Max), Kaylan Pry, Amelia Jones (Nicolas), Megan Hill (Noah), Porter Dombrowski (Mikaylie) and his 12 great grandchildren. In lieu of flowers please honor Ed's memory by doing an act of service for your fellowman.

In lieu of flowers please honor Ed's memory by doing an act of service for your fellowman.

Edmund Theodore Dombrowski was born on October 3, 1930 in Inglewood,...