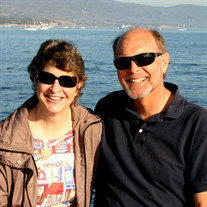 Douglas Morton Scarr died Sunday, June 28, after a 5-year battle with cancer. He was 61. Doug was a longtime resident of Valley Center, moving to the area in 1995 and most recently was a technical writer at Opto 22 in Temecula. A native San Diegan, Doug was born at Mercy Hospital, attended Grant Elementary, Roosevelt Junior High, and San Diego High School. He was a graduate of San Diego State University, earning a Bachelor degree in political science and then a teaching credential in general education – after first attended Sonoma State University. A Renaissance man of many talents, Doug was an accomplished musician, who played piano and composed. But, for more than 20 years, he dedicated his craft to the trombone, which he first learned as a young teen in school and Ozzie’s Band . He played lead trombone for the jazz ensembles at both Palomar and Mira Costa Community Colleges, played frequently with their Latin Jazz and concert bands, and was part of the orchestra for several stage productions, including Les Miserables, Annie, and Suessical. Doug enjoyed cycling, hiking, birds, the great landscapes, photography, playing Frisbee and was always in the mood for a good pun or a philosophical discussion. He also loved his cats, who were always nearby as his trusted companions. Along the way, Doug touched the lives of many as a school teacher, cab driver, insurance salesman and even tour bus operator, where he would entertain passengers with anecdotes about the city. His favorite childhood memory was buzzing along the back roads of Rancho Santa Fe with his dad in a TR-3. But it was later as a technical writer that Doug was able to combine his talent as a communicator with a genuine affinity for engineering and mechanics to create products of lasting value. Douglas is survived by his wife, Shelley; his daughters Natalie and Brianna; three grandchildren, Seamus, Patrick Douglas, and Makena; and his parents, Lew and Lila Scarr; and three siblings, Nancy, Gregory, and Michael. He will be greatly missed. Funeral service for Douglas will be on Friday, July 3, 2015 at 11:00 am at Pauma Valley Community Church at 32077 Community Church Drive in Valley Center, CA 92061, followed by interment at Valley Center Cemetery. In lieu of flowers a donation to the church Mercy ministries is suggested: Pauma Valley Community Church Mercy Ministries.

Douglas Morton Scarr died Sunday, June 28, after a 5-year battle with cancer. He was 61. Doug was a longtime resident of Valley Center, moving to the area in 1995 and most recently was a technical writer at Opto 22 in Temecula. A native San... View Obituary & Service Information

The family of Douglas Morton Scarr created this Life Tributes page to make it easy to share your memories.

Send flowers to the Scarr family.