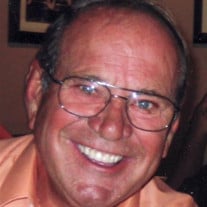 Donald Richard Crnkovic, of Escondido, CA, passed peacefully, to be in the company of our Lord, on July 14, 2019 at Scripps Memorial Hospital, Encinitas, CA. Donald, better known as “Duck” to his family and friends, led a very full and active life. He spent his growing years working on a local farm and in a bakery. After high school, he married Joan Louise Pearson; and was drafted into the United States Army. He received an Honorable Discharge and went to work at the local Gas and Electric Company. Donald was born on March 26, 1938 in Joliet, Illinois to Mary Catherine Panian and Vincent Anthony Crnkovic. Donald was one of five siblings. He was preceded in death by his parents, his daughter, Pamela Jean (Crnkovic) Reese; his sister, Marie (Crnkovic) Belom, and brothers Vincent, Frank (Joyce), and Lee (Sharon). Donald is survived by his loving and devoted wife, Joan; daughter, Suzanne Robertson (Terry) and his loving grandchildren who called him “Pops” and/or “Papa”– Taelor Sweeney (Mike), Randi Robertson, Garret Reese, Madison Reese and Ryan Robertson. Donald is also survived by many cousins, nieces, and nephews. Donald lived a good life filled with work and play and his love of family. He and Joan, Pamela and Suzanne moved to Escondido, CA in 1968. Shortly after they arrived, he and his brother Frank opened a restaurant called SANDWICHES -A- GO-GO, which they had for several years. He eventually started his own landscaping business DON’S LANDSCAPING AND CONCRETE, INC. which was very successful. His company was responsible for maintaining and improving the landscaping at Lawrence Welk Country Club for many years. Aside from all this activity, he helped the Department of Forestry during the wildfires which seemed to occur every year, by using his trucks to run supplies to the fire lines. He also worked at the Del Mar Racetrack during racing season, even though he had retired. Donald had a strong work ethic and thoroughly enjoyed the work. Donald took great pride in being active in his children’s and grandchildren’s lives. He helped his daughter, Suzanne, with her FFA project, a pig, that she raised at home and would show and sell at the Del Mar Fair. With his business, Don’s Landscaping, he sponsored a softball team that was called the “Ducklings” in the Escondido Girls Softball League; and, he coached and supported the senior girls’ tournament teams with “Don’s Landscaping.” Pamela was an awesome talent on the pitching mound-, her dad built her a pitching mound for her to practice and improve her skill. Donald and his wife also took pride in being involved anything their grandchildren did which included being the chapter, club, and team grandparents. Donald was an amazing dad for his daughters and a role model for his grandchildren. Donald loved family gatherings, sports, gardening at home, and any outdoor activity (especially fishing). Donald will be missed by all who knew him. Rest in Peace, Donald your work is finished. We love you.

Donald Richard Crnkovic, of Escondido, CA, passed peacefully, to be in the company of our Lord, on July 14, 2019 at Scripps Memorial Hospital, Encinitas, CA. Donald, better known as &#8220;Duck&#8221; to his family and friends, led a very full... View Obituary & Service Information

The family of Donald Richard Crnkovic created this Life Tributes page to make it easy to share your memories.

Send flowers to the Crnkovic family.