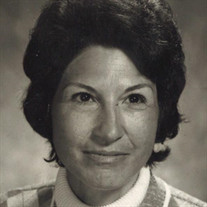 Delores (Del) was born at home in Spokane, Washington on August 10, 1927 to Eugenio (Eugene) Costanzo and Magdalena Mongelluzzo Costanzo. She passed away peacefully on July 16, 2015. Del graduated from North Central High School in 1945, played badminton, ice skated, and became an ardent skier. She was a member of Job's Daughters and worked as an elevator operator after high school classes. After graduation, Del went to work with the Peerless Dental Association and attended the University of Washington night school courses in Spokane to become a dental assistant, dental hygienist, and X-ray technician. She then accepted a position with the Washington State Dental Association in Seattle, attended night school again at the University of Washington and became a certified Medical Technician. Del set up three clinic medical laboratories and works as a Laboratory/Office Manager. She married Lawrence (Larry) LeClaire in 1964 and moved with her family to Huntsville, Alabama when Larry was transferred with the Boeing Company to work on the Saturn V/Apollo the Cascade County Pilots Association to fly blood required at many clinics and hospitals in the far reached areas of Montana. When Lass was transferred back to Seattle in 1969, she and the family moved to Bellevue, Washington. While there, Del joined the Somerset Women for Medic One organization, became the program chairperson and developed a project to raise funds for the Fire Department's Medic One Division. The project provided life saving equipment for two ambulances and the down payment on a new ambulance. In 1982, when her husband accepted a position with General Dynamics in San Diego, Del moved with him to settle in the city of Escondido. She joined the Federated Republican Women's organization and became program chairperson, moon landing program.Del joined the Boeing Wives Club, became the Program Chairperson, and helped to put together a fund raising fashion show to support the local Harris Orphanage for African-American children. She was the also the 1965 American Red Cross Blood Drive program director there and a "Poll Watcher" for NBC during the get out the African- American voting rights campaign. Del moved again with her family to Great Falls, Montana when Larry was transferred to work on the Boeing Company Minuteman Program. While in Great Falls during 1966 to 1969, she was the American Red Cross Cascade County Blood Program Chairperson and belonged to the Cascade County Republican Women's Party as Vice President and President. She set up a project with president and in 1984, set up the Republican Headquarters operation. Again she went to school, taking a course as a travel agent, and went to work with a travel agency in Rancho Bernardo, California. Her favorite pastime was playing bridge. She loved animals and was a docent for the Woodland Park Animal Zoo in Seattle and a long time member of the San Diego Zoo. Del loved to cook and created many gourmet meals for her family and friends. She is survived by her husband, Larry LeClaire; son, Robert D.; daughter-in-law, Jennifer; grand children, Daniel and Katie; sisters, Marie and Gennie; and brother, Art. A funeral Mass will be held at 10 a.m. on Thursday, July 23, at St. Mary's Catholic Church, Escondido, CA. Please make donations to Elizabeth Hospice.

The family of Delores LeClaire created this Life Tributes page to make it easy to share your memories.

Delores (Del) was born at home in Spokane, Washington on August...

Send flowers to the LeClaire family.