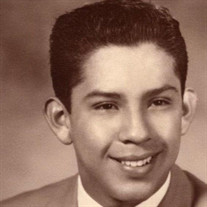 DeLisle Calac passed peacefully from this life in the early morning hours of January 24, 2022. He was 93 years old. He is survived by his wife of 58 years, Lois; his son, Gregory Calac (Laurie) of Auburn, California; his daughter, Cheryl Swift (John) of Georgetown, Maine; his son, David Calac (Michelle) of the Rincon Indian Reservation, California; and his daughter, Susan Calac Hagadorn (Doug) of the Rincon Indian Reservation, California. He was preceded in death by his daughter, Lisa Calac Horton. His quiver overflowed with twelve grandchildren and seventeen great-grandchildren. DeLisle was born on May 5, 1928 to Saturnino and Edna Calac. He was their fourth child; his older siblings were Lois Calac Lubo, Leo Calac and Don Calac. He lived his entire life in Escondido and on the Rincon Indian Reservation. He attended Central Elementary School and Escondido (Union) High School. DeLisle owned and operated his own plastering company until his retirement in 1985. DeLisle made as profound of an impact on Escondido High School as the school made on him. He never hesitated to support the school in any way he could and he played a key role in fundraising for the project that resulted in Wilson Stadium, Home of Chick Embrey Field. In 2008, he was inducted into the Escondido High School Hall of Fame for his incredible varsity letter achievements in football, baseball, and basketball. DeLisle was passionate about baseball his entire life. Two highlights for him were being drafted by the Padres PCL and playing in the 1960 World Champion Softball Tournament in Long Beach, California. Lasting 35-innings, the 7 hour and 20-minute game was one of the longest ever played in that tournament. DeLisle was well-rounded from a young age, and his interests included music as well as athletics. He played the violin as a child and later sang in a quartet. On Sundays he accompanied his parents when they visited Indian reservations to preach and share the gospel with the Native Americans. With his family, DeLisle was a Charter Member of Emmanuel Faith Community Church in Escondido. Throughout his life he was dedicated to the church, serving as a Deacon, an Elder, and later as the Chairman of the Board of Elders. He attended services faithfully and he served the church in a variety of ministries including Choir, Sunday School, Youth Leader, Men-on-A-Mission, Chair of the Building Committee and as the Dunamis Softball Team’s Catcher and 3rd Baseman. He was also a member and Chairman of the Missions Committee (now known as Global Outreach). DeLisle was dedicated to his tribe, the Rincon Band of Luiseño Indians, and he served as the Chairman of the Tribal Council in the 1960’s. He also served his tribe in recent years on the Rincon Economic Development Corporation (REDCO), the Gaming Commission, and the Donations Committee. He was a longtime board member of the United Indian Mission based in Flagstaff, Arizona. DeLisle and Lois were founding members of the Escondido Charitable Foundation and he was honored as King of the Grape Day Parade. He also served as a board member on the Escondido Boys and Girls Society. In 1970, DeLisle joined the Escondido Rotary Club and participated as a member of the Escondido and Valley Center Rotary Clubs for the remainder of his life which included a turn as club president. With his wife, Lois, he was recognized as the Escondido Rotarian of the Year in March 2017. In 1950’s DeLisle took up the game of golf which became a lifelong beloved hobby. It suited his philosophy of doing things properly and dressing sharply. Among his golf highlights were hitting a hole-in-one at The Vineyard Golf Course on its opening day, playing at notable courses in England and Scotland including St. Andrews and Royal Troon, and passing his enthusiasm of the game along to his sons, grandsons, and great-grandsons. DeLisle was so passionate about teaching David to play golf at a young age that he cut down an adult sized set of clubs long before junior clubs came into existence. DeLisle was tireless in his dedication to his family and friends, his hometown, his tribe, his church, and the deserving foundations and charitable groups in which he was involved. His strong handshake and genuine hugs will be remembered with loving fondness as we forge ahead with memories of him in our hearts. Services will be held at 9am on Saturday, February 12th at Emmanuel Faith Community Church Worship Center followed by a burial at the Rincon Indian Reservation Cemetery. His family would love to hear your memories and thoughts of DeLisle – please submit them in the comment section of this website. If you would prefer that they be shared anonymously, please send them to Greg (greg.calac at gmail.com). These remembrances of DeLisle will possibly be read aloud during his service. Thank you in advance for celebrating our beloved husband, father, grandfather, great-grandfather, and uncle in this manner.

DeLisle Calac passed peacefully from this life in the early morning hours of January 24, 2022. He was 93 years old. He is survived by his wife of 58 years, Lois; his son, Gregory Calac (Laurie) of Auburn, California; his daughter, Cheryl Swift... View Obituary & Service Information

The family of DeLisle Calac created this Life Tributes page to make it easy to share your memories.

DeLisle Calac passed peacefully from this life in the early morning...

Send flowers to the Calac family.