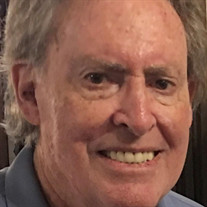 David Alan Sperber passed away at Scripps Prebys Hospital after a lengthy illness on November 29, 2019, surrounded by loving family and friends. Born on November 27, 1944, in San Diego, David graduated from Point Loma High School in 1962. Drafted into the United States Army, David served as a Military Police (MP) Officer in Saigon during the Vietnam War and later at Ft. Leavenworth in Kansas. Upon his return to civilian life, David trained in the underground electrical industry culminating in 1988, when David and his wife, Sandra, established the underground electrical contracting company, Pacifica Contracting. For over 30 years, Pacifica retained its position as a successful contracting company garnering the respect of clients and peers in the industry. David’s varied interests with no apparent connection, made him so much fun to be around. He enjoyed telling funny travel stories of situations Sandy would get themselves into, often in exotic and remote areas in the world then, without so much as a pause, enter into a serious discussion about his team, the San Diego Padres, or his favorite Christmas film, Die Hard! Golf, movies, dining, longs walks and Words With Friends were a few of his favorite activities, but time spent with those he loved is what David cherished the most. His warn engrossing manner and his ability to engage in conversation on any subject with family, friends and strangers made him a magnet for people. He will be missed most for his gentle and positive nature, sense of humor, ready smile and love of family and friends. On January 22, 1977, David married the love of his life, Sandra, and they spent 44 years completely devoted to each other. David is survived by his loving family: Sandra, his treasured wife, son, Matthew (Todd) Sperber (spouse Elena), and grandson, Ethan Sperber, (10 years), brother Ed (Skip) Leonard (spouse Nancy), sister Elizabeth Drew and loving nieces and nephews. David is pre-deceased by his parents, Lawrence and Joan, stepmother Helen, and by brothers Michael, Arthur and sister Ruth. David will be interred at Miramar National Cemetery. In lieu of flowers, the family requests donations may be made in memory of David Alan Sperber to The National Kidney Foundation: www.kidney.org

The family of David Alan Sperber created this Life Tributes page to make it easy to share your memories.

David Alan Sperber passed away at Scripps Prebys Hospital after...

Send flowers to the Sperber family.