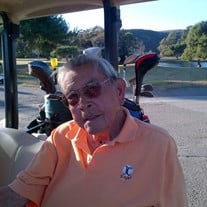 Clayton Balcombe, beloved husband, father, and friend, died in Oceanside, CA, on April 20, 2014, at the age of 90. Born in Cosmopolis, WA on January 21, 1924, Clayton was the ninth of ten children born to Maude Sexton and Harvey Balcombe. He and his wife Donna, who preceded him in death in 2003, resided in Washington until 1955, when he moved his growing family to Southern California where the last three of his eight children were born. Clayton entered the Army Air Corps at the start of World War II where he served in the 303rd Bomb Group (H) as Tech Sergeant. In March 1943, his B-17 collided with another aircraft over the Molesworth Air Base at Mears Ashby, England, and with the exception of he and another soldier, all perished. After recuperation, Clayton returned to active flying duties on D-Day, and left the service at the end of the war. One of the highlights of Clayton’s life occurred on March 31, 1996, when he traveled to England and was honored by the citizens of Mears Ashby as they dedicated a plaque commemorating his service and sacrifice to the people of England. He also toured The Mighty 8th Air Force Heritage Museum near Savannah, GA as well as numerous museums in Washington, D.C. where many Mighty 8th memorials are displayed. Clayton lived a full and happy life, committed to his family. Active in the American Legion Post 20 in Porterville, CA, Clayton served in various service positions, including Commander from 1972 through 1974 and District 15 Commander in 1976. He was an enthusiastic member of service organizations involving youth and charitable causes. In Porterville he could be found flipping burgers and roasting hotdogs at fund-raising events, as well as judging the entries of the Veteran’s Day Parades. Golf was Clayton's favorite pastime once he retired and moved to Oceanside, CA. He enjoyed traveling throughout the state with family and friends and consistently shot near his age. He also achieved the elusive hole-in-one on July 30, 2006. Clayton is survived by his eight children, Dennis (Kathy) Balcombe of Kowloon, Hong Kong, Michael (Jill) Balcombe of Seattle, WA, Roxanna (Leonard) Towery of Chase City, VA, Douglas (Valerie) Balcombe of Poway, CA, Patti (Robert) Bryant of Gold River, CA, Cheryl Comer of Sacramento, CA, (Stuart Comer of Rancho Bernardo, CA), Bruce (Jo Anne) Balcombe of San Diego, CA, and Jeannine Balcombe of Wheatland, CA as well as 21 grandchildren, 26 great-grandchildren, his brothers Forrest Balcombe of Cosmopolis, WA and John Balcombe of Apple Valley, CA, and numerous in-laws, nieces, nephews and many longtime friends. Donations in his memory may be made to the National Museum of The Mighty Eighth Air Force, online at: http://mightyeighth.org/support-the-museum/contribute-to-the-museum, or to a charity of your choice. Clayton will be greatly missed by all of us who loved him. “I've had a great run," he said.

Clayton Balcombe, beloved husband, father, and friend, died in Oceanside, CA, on April 20, 2014, at the age of 90. Born in Cosmopolis, WA on January 21, 1924, Clayton was the ninth of ten children born to Maude Sexton and Harvey Balcombe.... View Obituary & Service Information

The family of Clayton Sexton Balcombe created this Life Tributes page to make it easy to share your memories.

Send flowers to the Balcombe family.