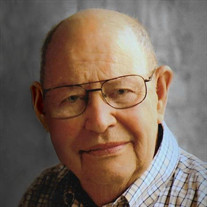 Chester Marvin Siegersma (March 26, 1932 – November 29, 2018) At age 86, Chet went to be with his Lord and Savior as he passed away peacefully on November 29, 2018, with his family at his bedside at Meadowbrook Village Christian Retirement Community in Escondido. Chet was born at home on the family farm on March 26, 1932, in Ogilvie, Minnesota to Ted and Winnie Siegersma. Chet was the younger brother to Gerald (deceased) and older brother to Roy (deceased), Arlo, Ann (deceased) along with two infant sisters, Alvina and Amanda who lived for only a few days. Chet was raised in the Ogilvie Christian Reformed Church. When Chet completed the eighth grade, his formal education ended when his parents travelled to California, leaving him to run the family farm while his aunt stayed with the children. In 1952, Chet enlisted in the United States Air Force and was primarily stationed in Japan during the Korean War. He was a crew chief responsible for the aircraft of many high-ranking officials and was proud of the work he did maintaining those planes. While Chet was serving in the Air Force his parents moved from Minnesota to Michigan. Chet had no desire to spend any cold winters in Michigan, and after an honorable discharge from the service, he moved to Ontario, California. First working for as a mechanic for Citrus Motors, the local Ford dealership, he eventually became an owner/operator of Citrus Valley Moving & Storage, an agency of North American Van Lines. Chet enjoyed much success as a business owner and received many accolades from North American Van Lines. After 22 years in the moving business, to spend more time with family, Chet made a career change and worked as the equipment maintenance manager for DVY Construction in San Marcos until he retired in 1995. Chet may have retired, but he never stopped working. After some travelling, he returned to work by hauling equipment for the Marine Corps at Camp Pendleton. It was required for him be accompanied by a Marine, and he took full advantage of his captive audience to share the gospel with his travelling companion. After 911, he put in some long days proudly doing his part to protect our country. In December of 1962, Chet met his future bride, Katherine Gorter, on a blind date set up by mutual friends. It was love at first sight as they were engaged on New Year’s Eve and married the following May. They eventually had three children together, Audrey, Sue and Brad. He loved his family and instilled upon his children the importance of hard work, family and faith. Vacations were primarily trips to visit family in Minnesota, Wisconsin and Michigan in the motorhome and usually included fishing. Chet attended Emmanuel Faith Community Church for over 20 years where he was involved with Men on a Mission and enjoyed working the Welcome Center for many years. Chet is survived by his wife of 55 years, Kathy, his children and their spouses, Audrey and Glen Brouwer (Escondido, CA) Sue and Bill Oglesby (Frisco, TX) and Brad and Cass Siegersma (Waverly, NE). Grandchildren Andrew & Alissa Brouwer, Brooke Brouwer, Rachel & Joel Kamp, Camille Brouwer, Caroline Oglesby, Mitchell Oglesby, Morgan Oglesby and Jordan Siegersma and great-grandfather to Reagan Rose Brouwer. His brother Arlo and Norma Siegersma, along with many nieces and nephews, also survives Chet. Services will be held at 10:00 am on December 10, 2018, in the chapel at Emmanuel Faith Community Church in Escondido. Interment will be at Miramar National Cemetery. In lieu of flowers, the family suggests donations to Emmanuel Faith Community Church’s Beyond fund, Calvin Christian School or San Diego Elizabeth Hospice.

Chester Marvin Siegersma (March 26, 1932 &#8211; November 29, 2018) At age 86, Chet went to be with his Lord and Savior as he passed away peacefully on November 29, 2018, with his family at his bedside at Meadowbrook Village Christian Retirement... View Obituary & Service Information

The family of Chester Marvin Siegersma created this Life Tributes page to make it easy to share your memories.

Send flowers to the Siegersma family.