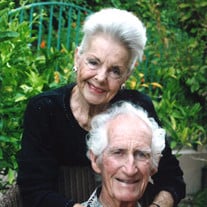 Lt. Col. Retired Charles Archibald Matson, Jr. died on Feb. 22, 2016 at 100 years of age in Escondido, CA. Charles was born on May 8, 1915, in Hollywood, California. He was the last survivor of nine children to Charles A. Matson Sr. and Louisa Josephine Florence Duin Matson. His siblings were Vina, Dottie, Smiley, Helen, Evelyn, Marjorie, Stella, and Jack. Charles and Janice were married on Sept. 23, 1945, for over 70 years. Charles lost his beloved wife, Janice Laverne Matson on Feb. 29, 2016, just one week later. Charles had four daughters, Jacqueline Castleman (from a previous marriage), Carolyn Couch, Dyann Matson Koffman, and Colleen Matson. He is also survived by his dog Honey, 13 grandchildren, 24 great grandchildren, and 2 great-great grandchildren. As a child, Charles grew up in Santa Monica, California. He loved playing sports, swimming in the ocean, and building things. He learned to work on cars on his own, and at 12 years, he rebuilt his first Model T car. He pretended to fly airplanes. His father took him to see Charles Lindberg take off on his famous transatlantic flight. That experience inspired him to one day be a pilot. As he grew older, he became known as a “jack-of-all-trades.” He had many different jobs: He was a puddler and rock crusher while building the California aqueduct, and was called “the kid;” a plant engineer and chemist for Meryl Norman, producing its first cold cream; a salesman for Honken and Konky and Parmely Dorman companies; and a chemist for a Dr. Herball, making one of the first formulas to dye gray hair. He finally achieved his career dream when he joined the Army Air Corps in 1942, four months after the attack on Pearl Harbor. During World War II, he was a bomber pilot, and flew 50 missions over the Pacific. He was awarded many medals, including two Army Air Corps Distinguished Flying Crosses and other commendations for his dedication and bravery. During his military service, he was an airplane maintenance officer and missile engineer at Vandenberg AFB, and head of Materiel at Ramstein AFB in Germany. He invented a pulley machine called the "Crash Pusher" that moved large aircraft on icy runways. Charles’s military service spanned from 1942-1969. He lived throughout the world in California, New York, Nebraska, North Africa, Germany, before retiring in San Diego, California. His success in many jobs can be directly attributed to his work ethic and his natural mechanical ability. He was always studying something at his desk, but he always found time to throw a softball and help his kids with their homework. The discipline and patriotism he learned in the Air Force never left him, as friends and family will attest. He had natural talents for building anything, such as home flooring without using fancy tools, creating landscapes and garden patios, and repairing engines in automobiles. His attention to detail was legendary. He loved to garden and had an orchard with amazing fruit trees. He conserved water by walking up and down steep hills dragging hoses everywhere, but never using a sprinkler system. He was environmentally wise before his time. Rather than purchasing new, he reminded his kids to conserve and use resources around the house for projects. He called himself “frugal Charlie.” After retiring from the Air Force at the age of 54, he went to college and got his undergraduate degree in business real estate from San Diego State University. At 58 years, he graduated from college alongside one of his daughters. His classmates always wanted Charlie to be on their teams so they could sponge up all of his wisdom. Charles’s greatest gift was story telling. In his later year, his hobbies were gardening, reading and enjoying picture books of the world, playing checkers with his family, and eating his favorite food (hamburgers, Mexican, margaritas, and apple pie and ice cream). He loved to travel with his family, particularly to the paradise of Kauai, Hawaii. His secrets to longevity were having a good wife and a zest for living, gardening, staying thin, eating good food, and, of course, telling you a great story from his life. He had a deep and steady faith in Jesus Christ. We believe he is up in heaven with his Lord, his wife, Janice, and the rest of his family and friends. • Visitation and viewing will take place on Sunday, March 13th, 3:45-5:00 pm at Alhiser-Comer Mortuary, 225 South Broadway, Escondido, CA Mortuary. Please note that daylight savings time starts that Sunday with clocks moving forward by one hour. • A mass will be held in their honor at St. Timothy’s Catholic Church on Monday, March 14, 2016, 9:20-11:00 am, at 2960 Canyon Rd, Escondido, CA. • Funeral services will be held at Riverside National Cemetery on Tuesday, March 15, 2016 at 12:30 pm, but cars must be lined up at 12:30 pm, located at 22495 Van Buren Boulevard, Riverside, CA. • A reception will follow at Mission Inn Hotel and Spa, 3:00-6:00 pm at 3649 Mission Inn Avenue, Riverside, CA. • Please leave your condolences and RSVP funeral and reception attendance on the Alhiser-Comer Mortuary website at http://www.alhiser-comer.com/. For more information, contact the mortuary at (760) 745-2162. • Flowers or donations may be given in honor of Lt. Col. Ret. Charles A. Matson and Mrs. Janice L. Matson to any one of the following organizations: Alzheimer’s Foundation of America at www.alzfdn.org, Fisher House at www.fisherhouse.org, or Wounded Warrior Project at http://www.woundedwarriorproject.org/. In your condolences, please let us know which events you will attend and the number in your party: _____ Visitation and viewing, Sunday, March 13th, 3:45-5:00 pm _____ Mass, Monday, March 14th, 9:20-11:00 am. Please arrive by 9:20 to be seated for family songs. _____ Reception following the Mass, Monday, March 14th, 11:00 am – 1:00 pm _____ Reception following the Mass, March 14th, 11:00-1:00 pm _____ Funeral at Riverside National Cemetary, Tuesday, March 15th, 12:30-2:00 pm _____ Reception at Mission Inn, Riverside, Tuesday March 15th, 3:00-6:00 pm

Lt. Col. Retired Charles Archibald Matson, Jr. died on Feb. 22, 2016 at 100 years of age in Escondido, CA. Charles was born on May 8, 1915, in Hollywood, California. He was the last survivor of nine children to Charles A. Matson Sr. and Louisa... View Obituary & Service Information

The family of Charles Archibald Matson created this Life Tributes page to make it easy to share your memories.

Send flowers to the Matson family.