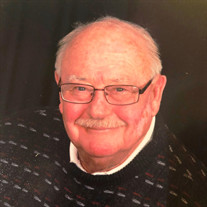 Charles Barnett Jr. was born on August 12, 1935 in Wheeling, WV, the eldest of 11 children born to Charles and Margaret Barnett. Chuck, better known as “Chick” to his family and close friends, grew up in Sioux Falls, SD. He graduated from Cathedral HS and attended South Dakota State University. He served in the US Navy, enlisting during the Korean War. Because of his strong math skills, he was trained as an ET2 Seaman, serving on the USS HAMUL tender where he provided maintenance support for radio and sonar equipment on submarines and other vessels. In 1958 he married Lenore Small and together they raised 10 children. Chuck became an insurance adjuster for the Saint Paul Fire and Marine Insurance Co. in the South Dakota area and was later transferred to San Diego as a claims manager. After 10 years with St. Paul Companies, he became a partner in the Ross-Barnett Insurance Agency in Escondido. Chuck was known for not only for his business sense, but also his integrity. Anyone who worked with him would tell you that it was not just business or personal insurance he offered to his clients. Those who came through his door often left with much more, as they turned to him for advice and support with personal, marriage, family or financial troubles. Chuck’s service extended far beyond the walls of his office into the community and beyond. He was a member of the Knights of Columbus for over 50 years, a past Grand Knight and a past Faithful Navigator of the 4th Degree Knights of Columbus. He was a member of the Escondido East Rotary Club for over 40 years and past President. Chuck was active with the Fr. Serra Club of San Diego, served as its president, and later helped found the Fr. Serra Club of North County, where he served as its first President. He served on the Education Committee for the Escondido Chamber of Commerce and was a member of the Business Breakfast Club for many years. He was also the first president of the Independent Insurance Agents Association of North County. As a devout Catholic, his faith and his family were always at the center of his life. He was appointed as one of the first Ministers of the Eucharist in the Diocese of San Diego, when laypersons first entered this ministry. For many years, he also took Holy Communion to the sick and dying, He was a devoted member of Resurrection Catholic Church, serving on its first parish council and later on its finance committee. Exemplifying his value of lifelong learning to his children and grandchildren, he graduated Summa Cum Laude with a Bachelor of Arts in Behavioral Science from National University at the age of 58. This accomplishment also finally gave him credibility with his younger 10 siblings, who were taught early on by their mother that, “Chickie says more than his prayers,” for he had now officially earned a B.A. in B.S. He will be remembered for sharing his love of sports and the outdoors with his family, close friends and business associates. He enjoyed hunting, fishing, and camping. Highlights in his retirement were trips to Italy, Ireland, and Scotland, which included a memorable visit to St. Andrews. He engaged in competitive sports for fun, likely for the bragging rights, winning the Navy’s “U.S.N.T.C. SMOKER” Middle Weight Division Boxing Title in 1954, and moving steps up a ladder or two at racquetball tournaments at the Courtyard Athletic Club midlife. He was an avid golfer for decades, often part of a regular foursome at San Luis Rey. He had a decent golf swing too, though nobody really knows just how good he was, as he was also known to pad his handicap from time to time. With 10 children and 11 grandchildren, he attended countless sporting events over the years as a spectator, but it was never enough to show how proud he was of each of them. In his early years of fatherhood, Chuck was an assistant coach in Pop-Warner Football, a Webelos Leader and a Den Master with the Boy Scouts of America. After retirement, Chuck signed on to work as an usher for the SAN DIEGO PADRES for 10 years, where he continued to share his love of baseball with spectators young and old, until he physically could no longer do so. He is survived by Lenore, his loving wife of 60 years, their 10 children Nick (Rosie) Barnett, Paul Barnett, Ellen (Alan) Grant, Rita (Ed) Krzywicki, Matt (Julie) Barnett, Tony Barnett, Ruth (Roberto) Barajas, Teresa (Jesse) Jacques, Chrissy (Jorge) Torres, Karen Barnett, 11 grandchildren, his siblings Frank (Sheryl) Barnett, Peter (Donna-Rae) Barnett, Maxine Barnett, Msgr. Steve Barnett, Tim (Sally) Barnett, Katie (John) Baldwin, Loretta (Sam) Barada, and Dennis (Liz) Barnett and hundreds of nieces, nephews and cousins, who all come from this Long line of LOVE and who will miss him dearly. He will be joining his beloved mother, father, sister Peggy, and brother Larry, welcoming him Home into the arms of his Heavenly Father. His family will carry on his tradition of Bloody Marys on Thanksgiving morning, and those daring enough will keep his spirit alive as they partake in oyster stuffing, juicy rare steaks, and smelly Limburger cheese (We’ll pass on the buttermilk, thanks anyway, Dad!). Services will be held February 21 with Viewing at 10:00 am, Rosary 10:30, and Funeral Mass at 11:00 am at the Church of the Resurrection 1445 Conway Drive in Escondido. Services arranged by Alhiser-Comer Mortuary alhiser-comer.com

Charles Barnett Jr. was born on August 12, 1935 in Wheeling, WV, the eldest of 11 children born to Charles and Margaret Barnett. Chuck, better known as &#8220;Chick&#8221; to his family and close friends, grew up in Sioux Falls, SD. He graduated... View Obituary & Service Information

The family of Charles Andrew Barnett JR created this Life Tributes page to make it easy to share your memories.

Send flowers to the Barnett family.