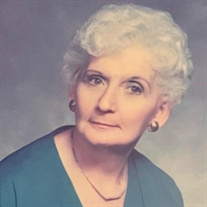 Catherine “Kitty” Dean 6/13/1929-10/30/2021 Kitty Dean loved an adventure, and very little held her back. When she was 12, she used her Saturday movie money to convince a barber to cut off her long curls, because she hated sitting still long enough for her mother to set them. On October 30, 2021, Kitty slipped away in her sleep on another adventure, joining her beloved husband Frank and her son Joe in heaven and ending her struggle with Alzheimer’s Disease. Kitty is survived by her sons Frank and Kevin, her daughter Lynn, nine grandchildren and three great-grandchildren. The youngest of six children in a large Irish Catholic family, Kitty grew up in South Philadelphia, but dreamed of traveling the world. She married her husband Frank on Thanksgiving Day in 1952. Frank was in the Navy, and he warned Kitty that they would move a lot. Kitty was excited at the prospect, and the family moved several times between 1952 and 1970, living in Philadelphia, Norfolk, Monterey, Guam, Harrisburg, Long Beach, CA, Hawthorne, NV, and finally Fallbrook, CA. It was while living on Guam that Kitty first visited Hong Kong and Japan, trips that instilled in her a lifelong love of Asian furniture and art. Kitty’s love of travel continued for the rest of her life, and she visited Australia, London, Berlin, and Ireland. Her last great journey was a Panama Canal cruise. Kitty was always ready for a road trip, and loved the performing arts - she would happily hop in the car and drive to Los Angeles or San Diego to see a play. And when visiting family in Philadelphia, she would often take the bus to NY to see whatever was playing on Broadway. Her friends and family describe her as feisty, funny, and one of a kind. The word glamorous comes up often, too, as she was usually the best dressed in any gathering. Mostly though, her friends talk about what a dear friend she was, and how much they will miss adventuring with her. Her family remember a devoted mother, grandmother, and aunt who enthusiastically supported her children’s ambitions and delighted in her grandchildren, nieces, and nephews. A funeral mass to celebrate Kitty’s life will be held at St Mary’s Church in Escondido, CA at 10:00 a.m. on December 20, 2021. A private internment will take place at Fort Rosecrans National Cemetery in San Diego, CA on December 21, 2021. In lieu of flowers, the family requests donations to the Alzheimer’s Foundation.

In lieu of flowers, the family requests donations to the Alzheimer’s Foundation.

Send flowers to the Dean family.