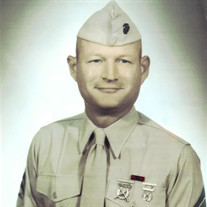 Carrol Douglas Watson May 25, 1935 - October 17, 2016 “We know that we have passed from death to life, because we love our brothers.” 1 John 3:14 Gunnery Sergeant C. Douglas Watson has served his final tour and was laid to rest on October 17, 2016 in Escondido, CA after a long battle with emphysema and the associated side effects. Doug was born at home on May 25, 1935, the youngest of six children born to Thomas and Pearl (Perry) Watson in San Angelo, Texas. Doug joined the United State Marine Corps in 1954. In the course of his twenty year career, he served at Guantanamo Bay during the Cuban missile crisis and throughout the entire Pacific Ocean region with three tours in the Vietnam conflict. He was awarded the Navy Achievement Medal for his service, and the Purple Heart for multiple wounds in 1967. He retired in 1974 as a Gunnery Sergeant and was a recognized expert in track vehicle maintenance. The greatest achievement that he recognized during his Marine Corp service occurred when he was on leave in December 1961 in San Antonio visiting his brother Johnny. Doug and his brother crossed the neighbor street to help the widow lady remove a dead tree from the front yard. That act of kindness, later lead to a few dates with the widow before his leave period expired. Then astronomical phone bills were generated as the two of them burned up the phone lines from San Antonio Texas to Hawaii. Finally, Doug’s mother Pearl, shared some depression era good sense with them, and advised Doug that he needed to get married, “because you can’t afford the phone bills!” Shortly thereafter a long distant proposal occurred and Doug married Shirley McBride on Valentine’s Day February 14, 1962 at St Mark’s Lutheran Church, Kaneohe, Hawaii. Instantly, Doug’s miracle occurred, he was a corporal in the Marines, was married and now not only a husband but the head of a family with four children ages 10, 9, 8 and 4. Shortly, after retiring from the Marines, Doug worked for the U.S. Civil Service supporting maintenance needs throughout all the Naval facilities in San Diego, retiring for the final time in 1996. With the kids all grown up Doug and Shirley took an extended vacation traveling throughout all of North America visiting almost all of our beautiful United States. He was always in position to see grandchildren, and now great-grandchildren. But the traveling when retired was often tough going, Doug on occasion noted that he no longer had any vacation or holidays off. He did note in reflection that it was a period in which he felt blessed and how he and Shirley were always in good health. He was also proud of becoming a Texan again. Doug and Shirley became voting citizens of Livingston, Texas with all the Texas tax benefits. They lived a nomadic lifestyle for over nine years. In the fall of 2005, Doug and Shirley returned to California and settled in Wildomar, Ca. They were able to choose a home close to their children and grandchildren, and close to California Lutheran High School where many of their grandchildren attended. It was there that they opened their arms to all the students who grew to love and respect him. In 2013, Doug and Shirley moved back to Escondido. They continued their tradition of making friends in the Meadowbrook community until he passed on Monday, October 17,2016. Doug was a gentle and loving husband to his wife, Shirley. Doug was a patient, honest, hardworking, responsible man, but also a joker, and teaser. He was proud of and deeply loved his whole family. He had unique combination of personal attributes in which he was able to quietly capture one’s friendship and love through his interactions with you. He loved his Lord, and was strong supporter of his church. Doug was preceded in death by his son Steven Paul. He is survived by his wife Shirley of 54 years, who was the love of his life, his sister Faye Mitchell of Adkins, Texas, his children Gene Watson (Nancy), David Watson (Kellie), and Karyl Morris (Jeff), his thirteen grandchildren and thirteen great-grandchildren. He was the model American for his generation; full of tenacity and grit, loyal to a fault, stoic by nature, and a man of devout faith. Through that rough exterior, he had a tender heart and such generous compassion, especially for the ones he loved. He would be proud to know what true impact he had on the people in his life as he was such a powerful influence and role model for those close to him, showing them how to live. We rejoice knowing that Doug lives on with our Heavenly Father. We also rejoice that he lives on in his children, his grandchildren, his great grandchildren and all the lives that he has come in contact with. We know that all of us have been changed for the better in knowing him. In lieu of flowers please consider making a donation to California Lutheran High School, which was very close to Doug’s heart. CLHS 31970 Central Avenue Wildomar, CA 92595

The family of Carrol D. Watson created this Life Tributes page to make it easy to share your memories.

Send flowers to the Watson family.