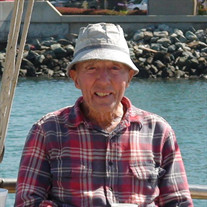 The “Handsome Young Sailor”, Carl W Shepard, passed away peacefully on August 10, 2020 at the age of 102. Born July 13, 1918 in Gaines, Argentine Township, Genesee, Michigan, he was raised on a dairy farm with two older brothers. He graduated from Gaines High School in 1936 at the height of the worldwide depression. Lacking the means to enter university, he entered the U.S. Navy in 1937, trained as an electricians mate, and was assigned to the destroyer, USS Fanning. The Fanning was shortly reassigned from New York City to San Diego, California, which became Carl’s lasting home. In San Diego, a shipmate introduced Carl to his sister, Zola Jean Stultz. They were married in Yuma, Arizona on June 24, 1939. Together they had four children, all surviving: Carol Jean, Casa Grande, Arizona, Carl W. Jr., Farmington, Utah, Dennis Lee and Donald Lynn, both of Escondido, California. Zola passed away in 1968. On November 24, 1974 Carl married Rosaleen M. Cox, another telephone pioneer. They were to share nearly 46 years of marriage and adventure. Soul mates, Carl and Rosaleen shared a love of both domestic and international travel, including special trips to visit grandchildren in in Germany and England. They were able to live independently and support each other in their Pacific Beach home until just last month, Completing his navy enlistment in the spring of 1941, Carl went to work for Pacific Telephone, starting a career that would lead from lineman to senior engineer. Even then, while his phone company job was protected from military service, he volunteered to return to active duty with the Navy in early 1942. Wartime service included three ships: the oiler USS Tallulah, the destroyer escort USS England and the attack transport USS Talladega. These gallant vessels carried him to some of the major actions of the Pacific war: Guadalcanal, Iwo Jima, Okinawa and the surrender of Japan in Tokyo Bay. Carl left active duty in the fall of 1945 and returned to his family and the phone company in San Diego. Carl showed patience and perseverance dealing with four rambunctious kids (twin boys are a special handful). For instance, by moving the family to a ranch southeast of Alpine, California, he taught them (mostly by quiet example) the meaning of hard work, responsibility, persistence, caring and attention to detail. He also led by example as a husband, father, scoutmaster, and coach. He always had a project in progress. Be it building a house (in Winter Gardens after the war), building a sailboat (a 55 foot ketch) after Zola passed away, the complete remodeling of their home in Pacific Beach, a cedar chest for each granddaughter or a replica boat or airplane toy chest for great grandsons. His ability to conceive, visualize, and fabricate were phenomenal. His incisive intelligence and intellect made it hard for his children to get away with much. He didn’t argue as much as quietly reasoned to an agreement, both in family and professional matters. Carl will be interred at the Oak Hill Memorial Cemetery, Escondido, California on August 17, 2020.

The family of Carl William Shepard created this Life Tributes page to make it easy to share your memories.

Send flowers to the Shepard family.