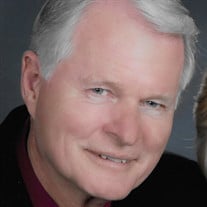 Calvin Kooistra was born August 30, 1940 in Evanston, IL to Reverend Hessel and Florence (nee Tiddens) Kooistra, and entered into eternal rest on October 7, 2019 at the age of 79. He is predeceased by his father and mother, brother Hessel and two sisters Rosemary (Kennedy) and Joan (Stevenson). He married his beloved, Mary in 1970 beginning a lifetime commitment as a family man. A dearly loved, father of Jeffrey (Theresa) and Jennifer (Brian) Gallagher and cherished grandfather of Caroline and Jack Gallagher. He is survived by his wife, children and grandchildren. Calvin was raised in California where he attended Hoover High School in Glendale. Upon graduation, Calvin enlisted in the United States Army and served in the Reserves. Calvin went on to earn his Associates degree from Los Angeles Trade Technical College in Engineering and attended General Motors Institute (GMI) in Michigan. Calvin’s love for all things powered, lead to a passion and career that lasted a lifetime. Early on in his career he raced boats and cars in southern California where he soon transitioned to a career in the automotive industry with Chrysler Corporation and General Motors in manufacturing engineering. His profession afforded numerous travel opportunities, which included residence in multiple countries throughout his 35 year career with General Motors. Among his many accomplishments were his contributions to General Motors Military Vehicle Operations, manufacturing engineering and overseeing multiple assembly plants abroad. He was an active and lifelong member of the Society of Automotive Engineers (SAE). In his spare time, Calvin enjoyed working on cars and spending time with his family in Northville, MI. In retirement, Calvin with his wife Mary, moved to San Diego, California where he was an active member and Elder at Escondido United Reformed Church. Embraced and loved by his fellow church members, Calvin enjoyed participating in counsel meetings, outreach and social gatherings. Across all chapters of his life, Calvin’s gentlemanly demeanor was endearing to all who met him. His generous spirit was complimented by his ability and willingness to help others. Calvin’s tools were vast and organized exactly in his workshop. His workshop was not just a physical place, but one that existed in his heart and mind. Through Christ he shared his gifts freely and gave generously to others. Calvin’s legacy lives on through all who knew him. He will be greatly missed. The funeral service Monday, November 25th at 1:00 P.M. with a reception immediately following at Escondido United Reformed Church 1864 N. Broadway, Escondido CA 92026. Reverend Christopher Gordon will officiate. Calvin will be remembered on Sunday, November 3, 2019, during the 5:00 PM service at Grosse Pointe Memorial Church (Barbour Chapel); 16 Lakeshore Drive Grosse Pointe Farms, MI 48236

Calvin Kooistra was born August 30, 1940 in Evanston, IL to Reverend Hessel and Florence (nee Tiddens) Kooistra, and entered into eternal rest on October 7, 2019 at the age of 79. He is predeceased by his father and mother, brother Hessel and... View Obituary & Service Information

The family of Calvin Kooistra created this Life Tributes page to make it easy to share your memories.

Send flowers to the Kooistra family.