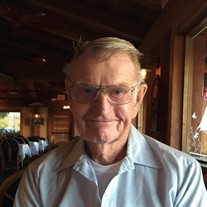 Bryan Charles Benson, 92, passed away peacefully with his four children at his bedside on April 7th, 2021. He was a native San Diegan, born in Mercy hospital on July 8th, 1928. He attended Hoover High School and San Diego City College, where he was a star football player, earning a scholarship to Cal Poly San Luis Obispo. Bryan struggled with dyslexia but he had a unique gift for mechanics, and was able to draw intricate plans and blueprints. He followed in his father’s footsteps by entering the plumbing trade. The majority of his career was spent working for University Mechanical and Plumbing, where he was a Journeyman Plumber/Superintendent. He built such notable San Diego landmarks as Jack Murphy Stadium, Mission Valley Center, and Palomar, Sharp and Scripps Hospitals. He retired in 1991 with 33 years of service. Bryan was introduced to the love of his life, Marilyn Jo Huff, by his friend Volney Peters while she was attending SDSU. He called to ask her out on their first date from a phone booth in Balboa Park. Their first date was a drive out to La Jolla to have ice cream at 31 flavors. He was so happy to meet “a nice Catholic girl.” They were married in 1952, and Bryan built their first house in Fletcher Hills. In 1961 with an ever expanding family, they bought a larger piece of property in rural Escondido. Bryan built his second home with his own two hands, a white ranch style house with a barn that is nestled in the oak trees, amongst the orange groves, with a stream running through it. He lived in this house for 58 years, it was a magical place for his children, grandchildren and great grandchildren to grow up and visit. Bryan was a devout Catholic and he attended both St. Mary’s and St. Timothy’s parishes in Escondido. He rejoiced in the beauty of the outdoors–camping, hiking, gardening, and loved tinkering with his tractors in his barn. He enjoyed watching the birds outside his dining room window. Happiness was a cold glass of milk and a big bowl of ice cream. He was a physically strong man with a kind and gentle soul. He is preceded in death by his beloved wife of 44 years, Marilyn Jo Benson, his older sister Jane Lucielle Moreno Jones and his parents Bryan Sewell Benson and Jane Teresa Macrorie Benson. He is survived by his older sister Mary Belle Keller (Capt. William Keller), his children: Bryan John “Johnny” Benson (Christy), Marianne Alane Urry (Eric Werny), Cathleen Therese Blazek (Laddie) and Elizabeth Diane Benson (Phil Bond). His grandchildren: Ryan Urry, Michelle Kundanani, Eric Urry, Christopher Urry, Samantha Nare and Rebecca Benson. And his great grandchildren: Annika, Ashton, Beckett, Dax, Aubrie and Kendal. A mass will be celebrated at 10:00 am. Friday, April 16th, at St. Timothy’s Catholic Church in Escondido. A private graveside service and burial will be at Oak Hill Cemetery on Monday, April 19th.

Bryan Charles Benson, 92, passed away peacefully with his four children at his bedside on April 7th, 2021. He was a native San Diegan, born in Mercy hospital on July 8th, 1928. He attended Hoover High School and San Diego City College, where... View Obituary & Service Information

The family of Bryan Charles Benson created this Life Tributes page to make it easy to share your memories.

Bryan Charles Benson, 92, passed away peacefully with his four...

Send flowers to the Benson family.