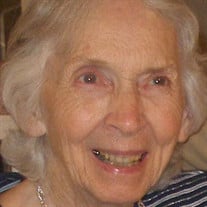 Betty was born in Cedar Rapids, Iowa on April 26th, 1922. Her parents were Francis (Frank) Erwin Buckner and Theresa Long Buckner. Unfortunately her mother passed away June 11th, 1923, a mere thirteen months after Betty was born. Her father and she moved in with her grandparents. In this arrangement Betty had the loving support of her grandmother, grandfather and several aunts. She always talked of how special and supportive this network was to her younger years. Her father Frank was born in Anamosa, Iowa in June 26th, 1899 and passed away in October 22nd 1952. Betty always spoke very highly about her father with his pleasant and calm demeanor. Betty graduated from Roosevelt High School in Cedar Rapids, Iowa in June of 1940. Gail Schwarz and Betty married on September 19, 1942 in Kahoka, MO. While living in Cedar Rapids, Betty worked at Collins Radio. She spoke often about how much she enjoyed working there. Upon being stationed in California, Gail and Betty decided to head to San Diego, CA in January 1951. They remained in San Diego for the rest of their lives. On March 14th, 1958 their first son Bart Richard Schwarz was born. Their second son, Todd Roger Schwarz was born on October 6, 1960. Both sons were born in the old Mercy Hospital in San Diego, CA and were their pride and joy! Gail Roger Schwarz preceded Betty in death on August 21, 2002. Betty took care of him up to his last days. Upon Gail’s death Betty remained in their Redwood residence until she was diagnosed with the early onset of Alzheimer's disease. Todd and Bart did their best to keep Betty safe whether it was spending time at her house or having her staying over at theirs. Unfortunately it became overwhelming for both family’s to share in her care. Betty was placed in Oak Hill Residential Care on August 21, 2012 and remained there until her passing on July 23, 2014. Betty was known by many people throughout her 92 years. One can only imagine the changes in the world that she experienced. She was a devoted wife and the absolute best mother that Bart or Todd could have ever wanted. She was a living saint, living selflessly for her husband, sons and relatives through the years. Her calm demeanor, sweet voice, quick smile and compassion for others was evident to all that had met her. She will be missed dearly by all who had known her. I can only hope that we all can maintain the compassion, dignity and legacy that Betty had in her years upon this earth. Betty was truly an angel here on earth and now she has her wings! Betty is survived by her sons: Bart Richard Schwarz – wife Betsy Elaine Schwarz – daughters: Lauren Jean Schwarz & Kelsey Rae Schwarz Todd Schwarz – wife Jane Schwarz – daughter: Katherine Sierra (husband Mike) & son: Jason Conard (wife Michele) Betty will now join her husband Gail at Fort Rosecrans National Cemetery 1800 Cabrillo Memorial Dr, San Diego, CA 92106

The family of Betty Rae Schwarz created this Life Tributes page to make it easy to share your memories.

Send flowers to the Schwarz family.