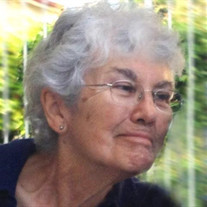 Barbara Jean Shackelford 10/16/1934 - 5/14/15 Barbara was born in Chicago, Illinois on October 16, 1934, the daughter of George and Beatrice Montone. She was an art teacher, then elementary school teacher for 33 years, the last 22 of those for Harvey School District 152 in Harvey, Illinois. She relocated to Vista in 1989 with her husband Ted. She is survived by her beloved husband of 29 years, Ted, daughter, Hilary (A.J.) Lentini and grandchildren Aria and Talia; Son, Ron (Martha) and grandchildren Max and Lucy; Son, Keith and granddaughter Caitlan; stepdaughter Bridgette McAllister (Milt) and step grandson Ryan, stepson Blaine (Laverne) Shackelford, brother Ken (Patricia) Montone and nephew Jay (Friederike) Montone and grandnieces Selina, Lili, and Sophie and grandnephew Béla, nephews Ian (Mary Ellen), Paul and niece Anne (Christopher) and grandniece Brooklyn and grandnephew Nicolas. She sold real estate during her summers as a school teacher, and after 15 years in the teaching profession earned her Masters of Education. Barbara enjoyed watercolor painting, gardening, and reading. She and Ted collected fine antique furniture, vintage china, and turn-of-the-last century clocks. She was an avid volunteer. She volunteered at Rancho Guajome Adobe in Vista, CA. She served on the board of the Shadowridge Owners’ Association for years, then served on the Greenbelt Committee (landscaping oversight) and after having done that, could identify any plant, large or small, that she saw. She poured over her Sunset Western Gardeners Catalog – the encyclopedia of Southern California plants — and because she found it all so interesting, memorized the entire 300+ page volume. She also was a member of the San Diego County Federation of Republican Women and received commendations for her service. She was an accomplished artist, having created over 50 original artworks. Her favorite medium was the Plein Air watercolor style. Barbara loved animals of all shapes and sizes, having had cats and/or dogs as pets for almost her entire adult life. She loved walking her beloved Chug, Padfoot, and was a devoted supporter of Canine Companions for Independence and the work that they do. In lieu of flowers, please send memorial donations to them at www.cci.org.

Barbara Jean Shackelford 10/16/1934 - 5/14/15 Barbara was born in Chicago, Illinois on October 16, 1934, the daughter of George and Beatrice Montone. She was an art teacher, then elementary school teacher for 33 years, the last 22 of... View Obituary & Service Information

The family of Barbara Jean Shackelford created this Life Tributes page to make it easy to share your memories.

Send flowers to the Shackelford family.