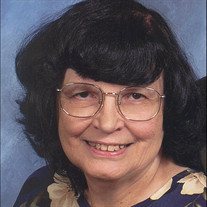 Anne Louise Schreiner passed away on January 16th, 2019, a result of complications from Multiple Sclerosis. She was born on August 30th, 1936 in Niagara Falls, New York to Louise (née Milleville) and Arnold Wendt. Except for two years in Rochester, New York, she spent her formative years in the Bergholz hamlet of Niagara Falls, just ten miles from the Falls Visitors Center. Her family belonged to Saint James Lutheran Church where Anne was baptized, confirmed, and attended a one-room school through the eighth grade before attending Niagara Falls High School where she graduated with honors in June 1952 at the age of just 15. She then attended Capital University in Columbus, Ohio, majoring in Math and English under several academic and music scholarships. She married classmate Robert N. Schreiner from Bayside, Queens, New York on June 2nd 1956. Two days later she graduated at age 19, tied for her class’ top academic ranking. The day after their graduation, Anne experienced her first airplane ride as the young couple flew to California to begin their life journey together. Initially they both worked at Northrop Corporation as assistant engineers. After their first daughter was born in 1957, Anne returned to work for over five years at Space Technology Laboratories (which later became TRW in 1960). Bob followed her there in 1959 and retired from TRW 33 years later. They became active members of Trinity Lutheran Church in Hawthorne, Los Angeles where they established a young adult’s group. Anne also taught Sunday school and was head of the church women’s group. They settled down in the Holly Park neighborhood of Inglewood where their family grew with another daughter (1964) and a son (1968), all three children baptized at Trinity. In 1969 Anne and Bob moved to Rancho Palos Verdes, a coastal suburb of Los Angeles, and their family grew even more with a son (1973), a daughter (1976), and with one more son (1982), the span between her oldest and youngest child was twenty-five years. In 1970 they joined into an extended spiritual family at the newly constructed Saint Paul’s Lutheran Church where Anne taught Sunday school, played piano, and served on the church council. For 31 years she was also active in Church Women United as the South Bay Unit Secretary & Treasurer. All six children were confirmed at Saint Paul’s, a record for a member family. They attended Palos Verdes public schools before graduating from various California universities. One daughter is a neonatal ICU nurse, another is a school teacher, and the third is a dentist. One son is an engineer and two are accountants. They lived in Rancho Palos Verdes for 46 years where they enjoyed an idyllic view of the Pacific Ocean and Catalina Island. Saint Paul’s, the Point Vicente Lighthouse, and Marineland of the Pacific were just a few miles away. Anne’s other favorite place was Disneyland, and she loved all things Disney. In 1984 she was diagnosed with Multiple Sclerosis with the aid of the first MRI unit in Los Angeles, and in 1990 she was treated for and overcame breast cancer. In October 2013, with her MS having advanced to a level requiring professional help, Anne moved to Oakmont Assisted Living in Escondido, California near San Diego. Bob joined her there the following year. On May 2nd, 2017, Anne became the first patient at the newly-completed “Oasis” skilled nursing center at Meadowbrook Village where she received a higher level of care for the progression of her MS. Bob moved into Meadowbrook’s assisted-living building which allowed him to visit Anne several hours each day. On January 10th, 2019, Anne was taken to Palomar Medical Center where she peacefully passed away a few days later with her husband and their children at her bedside. Anne is survived by her husband Bob of 62 years and their six children: Sue, Wendy, Bobby, Kurt, Marnie, and David; 14 grandchildren and 3 great-grandchildren; her younger brother Rev. Jerry Wendt (Whitewater, WI) and sister Jeannine Ary (Anchorage, KY). Two of her maternal aunts also survive: Mabel Klemm (97, Sioux Falls, SD) and Judy Stroble (92, Marion, OH). She remains an inspiration of faith, intellect, tenacity, and courage to her family and all who knew her. Interment is scheduled at George Washington Memorial Park in New Jersey, just outside New York City. In lieu of flowers, donations may be made in her name to further Multiple Sclerosis or cancer research, to St. Paul’s Lutheran Church of Palos Verdes, or to your favorite charity.

Anne Louise Schreiner passed away on January 16th, 2019, a result of complications from Multiple Sclerosis. She was born on August 30th, 1936 in Niagara Falls, New York to Louise (née Milleville) and Arnold Wendt. Except for two years in Rochester,... View Obituary & Service Information

The family of Anne Louise (Wendt) Schreiner created this Life Tributes page to make it easy to share your memories.

Send flowers to the Schreiner family.