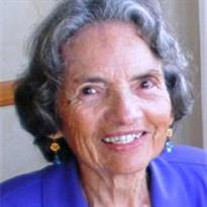 Angelita Reynoso Crummett passed away October 8, 2013 surrounded by family members in the home of her daughter, Mary Cappelletti, in Escondido, California. MarÃ­a de los Angeles â€œAngelitaâ€ was born April 3, 1923 in Sonora, Arizona. She is survived by her daughters Mary, Angie, Dolores, Carmen, Felicia, Teresa, her son, JosÃ© and two sisters, Mary Fierros of Phoenix, Arizona and Helen Graham of San Antonio, Texas. She was preceded in death by her loving husband, H. Bernard Crummett and sons, Bernard and Carlos and eight brothers and sisters. She was blessed with 17 grandchildren and one great grandchild. Angelita loved music, dance, the arts, and travel. She graduated from the Pasadena Playhouse in 1945. She was an accomplished stage actor, director, and dancer. She performed on stage in Padua Hills, Washington D. C., Phoenix, Houston, and on Broadway i Angelita devoted much of her life to serving the Church, the poor, and her community. As a member of Las Vecinas, she volunteered for the Valley Orthopedic Clinic for 16 years. After her husband's death in 1974, she returned to college, graduating in Angelita also volunteered as a Court Appointed Special Advocate (CASA) for abused and neglected children. In addition to her volunteer work in the community, she served on several ministries for Our Lady of Guadalupe Catholic Church in Calexico. She a Angelita traveled with family and friends all over the world including Mexico, Cuba, Central and South America, Canada, Europe, Japan, Egypt, Turkey, Israel and Vietnam. Last year she went on an Alaskan cruise with her children and traveled most rece

The family of Angelita Reynoso Crummett created this Life Tributes page to make it easy to share your memories.