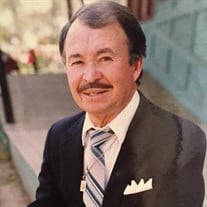 Escondido- Alfredo D. Franco, 81, of Escondido, California and Rosarito, BC, Mexico, passed away on May 24, 2016 at home from Pancreatic Cancer. He was surrounded by people who loved him and cared for him. Funeral Services will be held at Alhiser-Comer Mortuary on June 9, 2016 from 5:00PM to 8:00PM and on June 10, 2016, at 10:00AM at St. Mary’s Church in Escondido, followed by the internment at Oak Hill Memorial Park Cemetery. Alfredo was born in Jalisco, Mexico on November 4, 1934, to Juan Franco and Maria Diaz Franco. Alfredo is survived by his two brothers Carlos and Juanillo. He is preceded in death by two other brothers and three sisters. He is also survived by his daughter, Jacquie Cervantes and her fiancé, Luis Trujillo; his son, Alfredo Jr. (Freddie) and his wife, Mary Lou. Alfredo has four grand children, Yesenia and her husband Adrian; Isabella, Nicolas, and Tatiana as well as three great grand children, Sofie, Veronica, and Anabelle. Alfredo served in the US Army and was released with an Honorable Discharge in 1958. He then went on to work at Talone’s Meat Packing Co. in Escondido for forty years. He was an Entertainer, promoter, singer, and disc-jockey for Palomar Broadcasting Corp. (KOWN 1450 AM). He sang in the choir at St. Mary’s for many years as well as just about every wedding and birthday and anniversary function in Escondido. Alfredo organized many local and County wide charity and cultural events and served as the Master of Ceremony in these events. Alfredo was involved in numerous organizations: La Asociacion de Charros de Escondido, Amigos del Valle de Escondido, The Center for Arts of Escondido, as well as organizing the Cinco de Mayo festivities for many years. Alfredo’s greatest joy, next to his family, was cooking, entertaining and helping his community. That is why he was so admired and respected by so many people.

Escondido- Alfredo D. Franco, 81, of Escondido, California and Rosarito, BC, Mexico, passed away on May 24, 2016 at home from Pancreatic Cancer. He was surrounded by people who loved him and cared for him. Funeral Services will be held at Alhiser-Comer... View Obituary & Service Information

The family of Alfredo Diaz Franco created this Life Tributes page to make it easy to share your memories.

Send flowers to the Franco family.