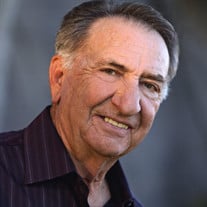 Albert (Al) Koury, 81, of Escondido, CA, died of cancer on December 13, 2014. Al was born in Pittsburgh, PA. He is survived by his wife of 38 years Ellen; his daughter Linda Dusterhoff and her husband Mike of Walnut, CA; his 3 grandchildren Natalie, Lauren and Jake; His brothers Dr. C. Wayne Unsell (Sara) of Bowling Green, OH and David Unsell (Carol) of Coalgate, OK; his sisters Jeanne Harris of Rocklin, CA, Diana Patten (Elwyn) of Woodward, OK, & Donna Unsell of Edmond, OK; extended family; and many friends. He graduated from El Paso High School (El Paso, Texas) in 1951 and Texas A&M in 1955 with a degree in Electrical Engineering. Al worked 35 years at Hughes Aircraft Company—for which he travelled extensively in the U.S., South America, Southeast Asia including Japan. He had experience in the fields of Radar, Airborne Military Communications, Satellite Communications, and Satellite Business Systems RF Terminals. Immediately following graduation from Texas A&M in 1955, he worked in Field Service and Support supporting the US Air Force all over the United States and then in Japan where he was assigned to support the Japanese Air Force. Then he moved on to working on spacecraft at Hughes Aircraft in Space and Communications. He was Chief Test Engineer on the Syncom spacecraft and Spacecraft Manager in the ATS series of Satellites. He was Laboratory Manager for the Ground Terminals for Commercial Satellite Communications, which included providing communications via a transportable terminal in China for President Nixon's visit to the People's Republic of China and providing the permanent Intelsat-type earth station for the Brazilian Government. He also was a Program Manager of the Indonesian National Communications Satellite System as well as a Program Manager of the communications system for the AWACS Aircraft. A Memorial Service will be held at 11 AM on December 22, 2014 at the Meadow Lake Golf Course, 10333 Meadow Glen Way East, Escondido, CA. In lieu of flowers, the family requests that donations be made to UCSD Moores Cancer Center, San Diego.

Albert (Al) Koury, 81, of Escondido, CA, died of cancer on December 13, 2014. Al was born in Pittsburgh, PA. He is survived by his wife of 38 years Ellen; his daughter Linda Dusterhoff and her husband Mike of Walnut, CA; his 3 grandchildren... View Obituary & Service Information

The family of Albert Koury created this Life Tributes page to make it easy to share your memories.

Send flowers to the Koury family.